Bill Would Make All Missouri Smoke-Free in 2011 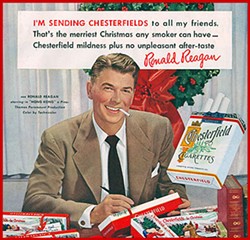 H.B. 1766 would make it illegal to smoke inside pretty much any building in Missouri with the exception of private residences, tobacco shops and 20 percent of hotel rooms in the state.

If approved by legislators and signed by the governor, the law would go into effect January 2, 2011 -- the same time that less-stringent smoking bans also go into effect in St. Louis county and city. The bill also restricts smoking within 15 feet of the entrances to buildings.

Owners of public businesses in which someone is found smoking would be subject to a $50 fine for a first infraction, $100 for the second and $500 for the third violation. The law would be enforced by the state's Department of Health and Senior Services or a local designee such as a fire department.

Daily RFT has a call out to representative Bivins to discuss the bill in more detail. More when we hear from him.