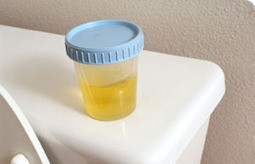 Buzz kill! Our very own Maria Chappelle-Nadal, D-University City, has proposed a bill in Missouri's House that would require her elected colleagues throughout state government to undergo drug testing.

Here's a summary of the bill; here's the actual text.

Should the bill pass, an official would submit to screening both before assuming office and every couple years thereafter. Yesterday, Chappelle-Nadal reportedly told her chamber's special committee on ethics and government reform that she might tweak the language to render the testing voluntary.

According to the House website, the bill is not on the calendar yet, nor has any hearing been scheduled.

Rep. Chappelle-Nadal just stopped by our office (that was fast!). She insists that no specific bad behavior by any of her colleagues prompted her proposal. In fact, she filed a similar bill in 2006, which never got off the ground. She says this one, however, will likely become subsumed in an omnibus bill next week.

Rather, she sees her elected-official-drug-screening bill as an extension of the other pro-transparency and good-government bills being bandied about in Jefferson City as of late.

"I don't feel as though we should limit our ethics legislation to campaign finance," she offers, adding that other locales, such as Burbank, California and Jefferson Parish in Lousiana already have voluntary random drug testing.