Update published Jan. 28. 5:25 p.m.:
Rams running back Steven Jackson has issued a statement denying the allegations made against him by his ex.
"It's disheartening that I have to address any alleged allegations 10 months later, but I have read the accusations made by Supriya Harris, and they are untrue," the statement reads in part.
"I will address this matter thoroughly through the appropriate avenues, but not through the media," Jackson adds. [Read TMZ's post here.]
Meanwhile, GoogleTrends lists "supriya harris" as the 14th-hottest search term on the Internet.
------------------------
Celebrity news site TMZ.com is reporting that St. Louis Rams running back Steven Jackson allegedly beat his pregnant girlfriend during an argument last March.
In a statement made last week to the Las Vegas police, the ex-girlfriend, Supriya Harris, says Jackson began beating her after an argument last spring in Las Vegas. Harris was nine months pregnant at the time.

After the incident, she says Jackson took her to the hospital but told her to lie about her injuries. She gave birth to a son ten days later and the couple split a few months later.

The two have been spatting lately over child support payments.

So who is Supriya Harris? 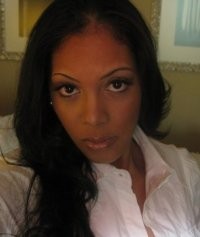 According to the police statement, she's a 29-year-old stay-at-home mother from Mableton, Georgia. She's a statuesque beauty at 5' 10" and 152.

She's also the woman who convinced Jackson to have a painful colonic back in 2008.

Here's Jackson's account of the procedure as recounted in a Yahoo Sports article:

"My girlfriend had the bright idea: 'Let's go get your system cleaned out.' It
lasted about 45 minutes, and by the end, I (expletive) wanted to cry. Let's just
say I got stabbed in the (rear) six times."

Not to excuse Jackson for his alleged treatment of Harris, but perhaps he was still sore at her from from the colon cleansing.