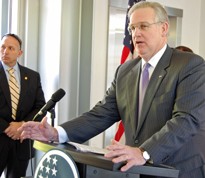 When asked point-blank today whether he thought it was a good idea to transfer control of the city's police department back to the city, Governor Jay Nixon balked.

After a press conference in St. Louis, Nixon opted to keep his opinion to himself when asked about recent efforts to move control of the St. Louis Metropolitan Police Department out of the hands of the state and into city control.

"I don't think this is the forum for that," Nixon replied when asked for his opinion on recent efforts to transfer control of the department back to the city.

As his entourage headed for the stairs at the Gateway Multimodal Transportation Center (aka, the new Amtrak station), we asked again if Nixon thought if the transfer of power was a good idea. Instead, press aides promptly handed out their business cards.

The department is ruled by a five-person board of commissioners, four of whom are chosen by Nixon and who must be approved by the Legislature, with the St. Louis mayor serving as the fifth member. Recent waves of support for moving to department into city control -- the state gained control of the department the same year the Civil War began -- have brought the issue back into the limelight, as have critical assessments of the department by state auditors.

Lawyer Brad Ketcher is leading the most recent effort to place control of the police back into city hands. He recently saw petition proposals --  that would place the issue on the November 2010 ballot -- approved by Secretary of State Robin Carnahan. Now Ketcher just needs the signatures.

St. Louis Mayor Francis Slay also been calling for a return of local control of the police -- recently using a critical state audit of the police department as justification.

Slay even blogged about it November:

"The current structure of governance may have served the City well during the Civil War, 1904 World's Fair, and World War II. But, it is badly outdated and no longer works. It is time to change."

Slay was at Thursday's press conference, seated in the front row. He was acknowledged by the speakers but didn't address the press himself.