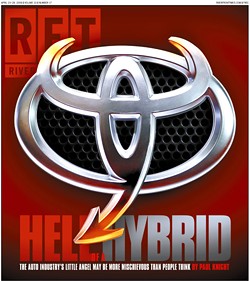 Toyota yesterday announced that it would halt the sale of eight models of cars and trucks and recall some 2.3 million vehicles to correct sticking accelerator pedals.

Yesterday's announcement follows a somewhat similar recall last fall when the car maker advised drivers of its Prius and Lexus hybrid models to remove floor mats that could pose an acceleration risk. (In April of last year Riverfront Times and other papers in the Village Voice Media chain published an investigation looking into claims design flaws led to several accidents and deaths involving Priuses.)

The vehicles affected by yesterday's recall and sales suspension include:

All of the above vehicles are assembled in Canada or the United States.