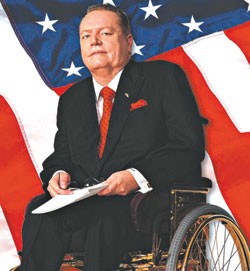 The first, Joseph Franklin, was convicted in 1997 for the shooting death twenty years earlier of a man outside a Richmond Heights synagogue in suburban St. Louis. Franklin also was convicted of shooting two other men in the synagogue parking lot that day.

Franklin also has claimed responsibility for the shooting of Larry Flynt, publisher of Hustler magazine after he became enraged over photos of an interracial couple in the magazine.

Franklin has also been convicted for the murder of two African-Americans in Utah, the murder of an interracial couple in Wisconsin, and the bombing of a synagogue in Tennessee.

In related news, the Missouri attorney general also called for an execution date for Allen Nicklasson, who was found guilty in 1996 of first-degree murder for the death of "Good Samaritan" Richard Drummond.

Nicklasson was the trigger-man in the 1994 killing of Drummond, who had offered a ride to Nicklasson, Dennis Skillicorn and Tim DeGraffenreid after their car broke down on Interstate 70. The state executed Dennis Skillicorn last May for his role in the crime.

The U.S. Court of Appeals for the Eighth Circuit had put Missouri's lethal-injection protocol on hold while it reviewed certain facts in Clemons v. Crawford. Their ruling denying rehearing December 22, 2009, cleared the way for several Missouri cases to move forward, including these two.

The Eighth Circuit has confirmed the constitutionality of Missouri's law in this area, and our request reflects that fact," Koster said. "Allen Nicklasson and Joseph Franklin both showed total disregard for the innocent people whose lives they took."