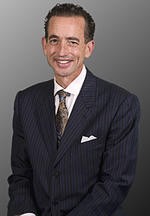 A federal judge has ordered the outdoor clothing giant North Face and the tiny local apparel company it's suing, South Butt, to try to work out a solution to their conflict through mediation during the last few weeks of March.

Albert S. Watkins, attorney for South Butt and its founder, Mizzou freshman Jimmy Winkelmann, said that a court-ordered hashing-out of differences is common in civil cases.

Normally, it follows an exhaustive discovery process, but in this case, Watkins said, "there didn't seem to be any facts in dispute. This one is not complicated."

The implication being that interpreting those facts is the sticking point -- and oh how sticky it's been. We'll leave the substance -- whether or not South Butt is truly a parody, as Watkins insists -- for another post. For now, let's discuss style. We've already blogged about Watkins' cheeky answer to North Face's initial claims.

What was interesting was how, last week, the heretofore restrained counsel representing North Face finally showed flashes of its own smart-assery (click here for the filing). Voila an excerpt:


Defendant Winkelmann may claim to resemble Alfred E. Neuman, but he and his fellow Defendants are hardly publishing Mad Magazine, and their knock-off apparel is a far cry from the parody stickers of The Topps Company's Wacky Packages...

Moreover, their attempt to pass themselves off as fleece-clad soul mates of Weird Al Yankovic reveals the hollowness of their position.

Watkins said he finds it "refreshing" that North Face has "attempted to embrace the levity" he believes this case calls for. But, the lawyer hastened to add, "Their parody of my parody of this case sucks. And I say that with the highest degree of respect for their effort."

See You in Court