Mizzou Students Want Live Tiger at Games, But Where to Find Big Cats? 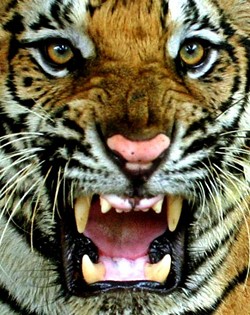 This just in from the Columbia Daily Tribune:

The president of the Missouri Student Association, Tim Noce, is lobbying University of Missouri officials for a live tiger to be displayed inside the football stadium on game days.

Noce, a senior at the university, notes that Louisiana State University and Memphis University each have live tiger mascots. Mizzou, meanwhile, just has that lame Truman "The Tiger."

"A bunch of us were like, 'Hey, why can't we have one, too?'" says Noce, who admits that he's received a cool reception thus far from school officials.

Beyond the obvious dangers of placing a man-eating carnivore before 50,000 college students of questionable sobriety, there is the cost. A tiger can set you back $13,000 and that doesn't include housing and feeding the animal.

Noce says he's now thinking of renting a tiger from the Saint Louis Zoo. Problem is, the zoo doesn't seem thrilled with the idea either.

Come on, Missouri! Can't anyone in the Show-Me State (a.k.a. one of the Humane Society's "Worst States for Exotic Pets") come to Noce's aid?

How 'bout you there at Wesa-A-Geh-Ya animal refuge outside of Warrenton? Can't you lend Noce one of your tigers? Not the 800 pound beast that scaled a 12-foot fence and mauled a man in 2008, but another -- friendlier -- tiger?