No Way to Say "I Love You." Joplin Man Nearly Chokes on Diamond Ring 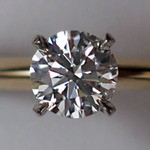 Romeos planning to propose this Valentine's Day can learn a lesson from a Joplin man: Don't steal -- but if you do, don't swallow.

The Joplin Globe spun a great yarn this past weekend, describing how 23-year-old Cleon Harris toted a two-carat diamond ring into Newton's Jewelry in Joplin last Thursday, intending to make a little profit. The jeweler quickly realized the $20,000 beaut matched the description of a ring that had been stolen from a Joplin woman only hours before.

The jeweler called police and stalled Harris and a female companion, 19-year-old Breanna Johnston. But they became suspicious, reports the Globe, asked for the ring back, and headed for the door just as police arrived on the scene.

The officers got a little surprise as they proceeded to pat down Harris. Harris literally hacked up the ring.

According to the newspaper, the ring was stolen from a woman's purse -- which was left unattended in her parked car -- about four hours before Harris tried to have it appraised at Newton's Jewelry.