January 25, 2010 at 1:50 PM
comment
Just got off the phone with Lanny Brooks, director of the Illinois Horseman's Benevolent and Protective Association. He confirmed the early reports that Fairmount Park will indeed host 52 days of horse racing in 2010, a full schedule. 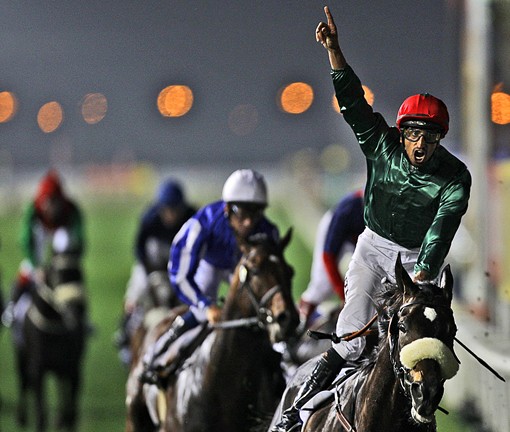 The announcement was made official at a 1:30 p.m. press conference at the track in Collinsville.

Until today, it seemed as though a dispute between the Illinois Racing Board and four union workers at the track would result in just three days of live horse racing in the coming year.

Brooks said the deal came "right down to the wire" and was the result of the combined efforts of the Horseman's Association, the Illinois Racing Board, and "about eight different local legislators."

"We had some meetings and tried to put some bugs in some people's ears in a few different places," Brooks said. "Then last night I got a call from the Director of the Illinois Racing Board saying the Board kicked in a couple concessions that the union workers wanted. It was a shock."

Brooks also says legislation is now in the works in Illinois "to make sure this doesn't happen again."
The Post-Dispatch had the scoop, reporting earlier this afternoon:


"We have an agreement and it's just a matter of executing that agreement," IRB excecutive director Marc Laino said by phone from his Chicago office. "We have to tie up some loose ends on the agreement.

"But I can say that we have an agreement in principle and it appears as though we're going to race the full 52-day meet as awarded by the board."

Details of the agreement have not been released, although it is believed that two of the major sticking points -- the 75 days the IRB said the six state employees at Fairmount had to work this season and insurance for those employees -- are part of the agreement.

Check back for more info when it's available...