Under These Same Stars, a film based on a murder investigation in Ste. Genevieve in 1773, will have its premiere at 1:30 p.m.  this Sunday, January 24, at the Missouri Historical Museum. Its creators promise a thrilling tale of mystery, love and legal drama set in a milieu unknown to most Americans.

The film is based on Stealing Indian Women: Native Slavery in the Illinois Country, a scholarly work by Carl J. Ekberg, a professor emeritus at Illinois State University who has devoted most of his academic career to studying the "Creole Corridor" in the colonial-era Mississippi Valley.

About 25 years ago in a Ste. Genevieve courthouse, Ekberg stumbled upon a pile of legal documents concerning the investigation into the death of a Native American slave woman. The chief suspect was a métis, or mixed-race, hunter named Céledon. Ekberg remembers a passing interest at the time, but he didn't decide to write about the case until a few years ago when he discovered duplicates of the same documents in Seville, Spain. (Between 1763 and 1800, the Louisiana Territory was actually part of Spain.)

Céledon, it turned out, had been romantically involved with the dead woman. After she rejected him, he returned to a former love, the woman's close friend and fellow slave Marianne. Once the investigation was underway, he sneaked back to Ste. Genevieve to try to persuade her to run away with him.

"There was a struggle between them over whether they should become a couple," says Bob Streit, the film's screenwriter. "Marianne was a full-blooded Native American slave of the Aubuchon family. She was raised in a French home. She was a Catholic. Céledon wants to talk her into running away with him into the woods. But she might not want to leave. She might be given her freredom. And out in the woods are wild animals and the same tribe that killed her family. It's a really compelling human drama see through the prism of slavery."

The film's director, Dan Johnson, is actually Ekberg's nephew. Johnson's mother Anne, who lives in Webster Groves, brought the book to her son's attention and also helped bankroll the project. The actors were all volunteers (including Streit, who plays Corporal Oliver, a Spanish soldier whom he describes as comic relief) and the costumes were donated by historical re-enactors or sewn by Johnson's wife Molly. 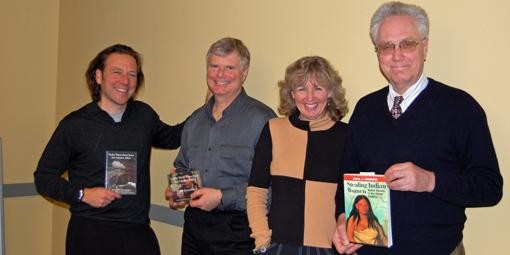 Ekberg, Streit and the Johnsons were all coy about giving away any more details about the outcome of the investigation or what became of Céledon and Marianne. But they all wanted to emphasize how different the idea of slavery was on the western frontier from the version depicted in books and movies like Roots.

"In this death," says Ekberg, "there was an autopsy, then an investigation with a dozen depositions. This wasn't the death of a slave where you throw the body in the river and move on. This woman was part of the community. It was a big deal."

The trailer for Under These Same Stars after the jump: