This "Pants on the Ground" T-Shirt Should Complete Your Outfit

January 20, 2010 at 4:02 PM
comment
Every year the best part of American Idol is the early episodes where people fresh off the street -- a.k.a. "street people" -- audition before the Idol judges. Their laughably awful songs are what we remember long after the seasons are over and a new "idol" is crowned. For example, you probably know William Hung, but do you remember who won that season?

This season's front-runner for awkward audition of the year has to be this gent:

Now, as you'd expect, a few shrewd entrepreneurs have sprung up to sell T-shirts depicting a message that's near-and-dear to the heart of one St. Louis-based entrepreneur: Thomasina Clarke, creator of Bagg'ns. ("Tired of Seeing Underwear, Mother Launches Clothing Line to Let People "Sag" with Dignity.")

Her line of jeans with two waist-bands (one real, one faux) should go smartly with the shirt below: 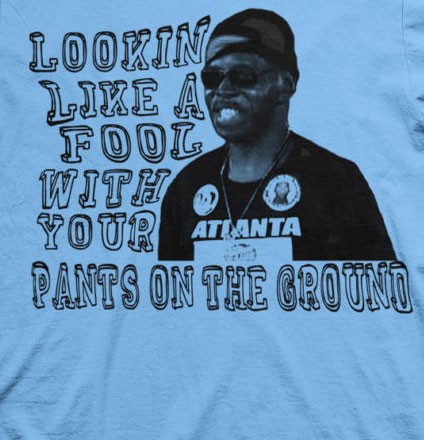 The shirt above (now online for sale in several places) and the Bagg'ns below.

Sag on, without fear of repercussion.

Apropos of Nothing Bidness Music