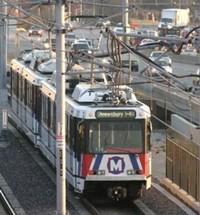 Metro tonight is hosting the first of five forums scheduled for this month to outline its long-range plans.

This evening's meeting, open to the public, runs from 5:30 to 7:30 p.m. at the St. Louis County Library Headquarters on Lindbergh Boulevard.

The forums -- billed as "workshops" -- will examine Metro's five, ten and thirty year development plans. Metro is asking St. Louis County voters to approve a half-cent sales tax in April that will fund public transit expansion in the region.

Metro is also planning a sixth "web seminar" later this month to accommodate people who can't attend the five physical workshops slated for this month. More information on the meetings and Metro's plans here.