Highways to Hell: How Does St. Louis Stack Up Among the Nation's Most Gridlocked Cities? 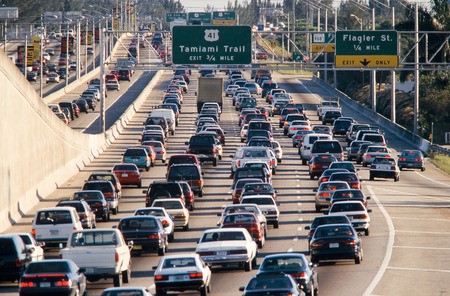 When it comes to nightmare commutes, the Hollywood Freeway in Los Angeles finishes at the head of the line. That infamous stretch of asphalt is in a state of near-paralysis for nearly 80 hours a week, when motorists can expect to limp along in bottleneck congestion at 14 m.p.h.

The Lunalilo Freeway in Honolulu was second worst in bumper-to-bumper traffic, followed by the Capital Beltway in Washington, D.C., Interstate 35 in Austin, Texas, and the James Lick Freeway (U.S. 101) in San Francisco.

These are the findings published today in The Daily Beast, the always entertaining website created by Tina Brown, which set out to to determine the nation's 75 worst commutes.

The methodology employed was to first rank cities with the worst rush-hour congestion based on a peak hour ( 6 a.m. to 10 a.m. and 3 p.m. to 7 p.m.) Travel Time Index, as well as calculating the number of hours America's 100 million commuters squander in bottlenecks.

After the jump, we'll see how St. Louis fared.

Finishing No. 45 in the country's gridlock sweepstakes was our very own southbound Interstate 270, where the worst bottleneck was found to be at Dougherty Ferry Road.

Here's the stats Daily Beast compiled about I-270: