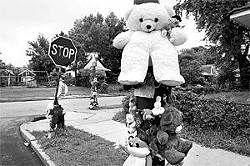 Last week I asked the St. Louis Metropolitan Police Department to provide me with some raw numbers concerning homicides.

In particular, I was interested in knowing how many teenagers died last year -- and in recent years -- as a result of violence in St. Louis. I asked for this information because based on the details of murders reported in our crime section, "The Big Bloody", it seems that adolescents account for at least one-third of all homicides in St. Louis.

Of the 143 homicides committed in St. Louis in 2009, 25 of them resulted in a victim between the ages of 13 and 19. In other words, seventeen percent of murder victims last year were teenagers.

Here's a look at the stats for the last three years:

As the table above indicates the rate of teen homicides has actually dropped in St. Louis since 2007 and held steady the past two years.

Still, one in six people murdered in St. Louis is a teenager? That's sad. And those homicide numbers nearly double when you add to the teenage demographic those people killed at the age of 20 and 21. Take a look:

Bumping up the age of "teenager" to 21, we arrive at my original guesstimate that one-in-three homicides result in the death of an adolescent.