January 15, 2010 at 4:11 PM
comment
Flip the bird to cabin fever and enjoy the thaw this weekend. Mild temps are to be celebrated in January, but that doesn't mean you should go broke doing so. Here are our ten suggestions for weekend entertainment (inside and out) for $10 or less. As always, some events may be 21-and-up and call ahead before you leave.

Critical Mass Creative Stimulus at Regional Arts Commision (Friday)
The business economy is...let's say, "wheezy," but in the realm of local arts, we are currently reaping the benefits of various economic stimuli. Critical Mass Creative Stimulus, the new exhibition at the Regional Arts Commission (6128 Delmar Boulevard; 314-863-5811 or www.art-stl.com), features installations by the four recipients of the inaugural Economic Stimulus Project, a financial jump-start for promising artists bequeathed by Critical Mass for the Visual Arts. Martin Brief, Cameron Fuller, Robert Goetz and Asma Kazmi are names you may recognize if you frequent the galleries. Free. Read the rest of Paul Friswold's preview here. 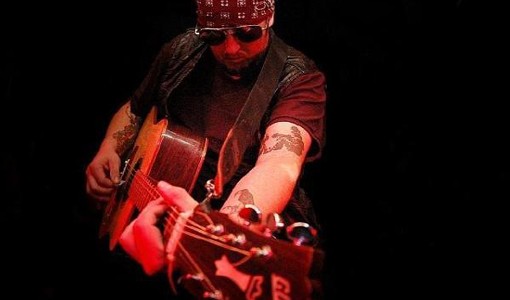 Bob Wayne at The Fox Hole (Friday)
Bob Wayne is Seattle's reigning king of unadulterated, lumpen-proletariat, faux-bluegrass, hellbilly-trucker shtick, not that the competition is especially fierce. Even his heroes and friends in the Supersuckers can't match his tattoos, shaggy-dog stories and laser-like focus on the deep, dark heart of white trashdom. $8. Read the rest of Roy Kasten's preview here.

Karin Hodgin Jones' Mimetic Labors at the Good Citizen Gallery (Friday)
The opening reception for Karin Hodgin Jones' latet show runs from 6 to 10 p.m. Friday at the Good Citizen Gallery (2247 Gravois Avenue.) The gallery describes Mimetic Labors as such: "Hodgin Jones utilizes machines to perform mundane repetitious tasks that result in poetic movements. The driving mechanisms in her sculptural installations perform their tasks devoid of any emotional content, but the resulting actions - plucking, tugging, and shaking sculptural elements -- captivate and seduce." In a word, it's hypnotic. Check out the video above. Free. More information is on the event's Facebook page.

Friday Nite Stand up Comedy Jam!!!!!!! at the Gas Light Theater/West End Grill (Friday)
We shouldn't quibble about the excessive exclamation points in the name of this event, lest the comics openly taunt us from the safety behind their microphone. It's one sure way to ruin date night: heckling a comic who's already a testy pile of nerves. Instead, go to this $6 event (no one under 18 allowed!) and enjoy yourself. Shut-up, turn off your cell phone, avoid the front row and prepare to laff. It's at the West End Grill (354 North Boyle Avenue) on Friday night. Here is the Facebook event page.

Fire & Flair at SkyBox (Friday)
When simply making a great drink, providing an open ear and an easy smile isn't enough, there's flair bartending. These showmen (and women) behind the bar play with fire, flip your glass and bottle, and execute pouring maneuvers we thought impossible. It goes down Friday at SkyBox (800 North 3rd Street.) from 10 p.m. to 3 a.m.

Loop Ice Carvinal in the Delmar Loop (Saturday)
You can't spend all winter hunkered down under a Slanket! You might as well embrace the chill and have a little fun with it while you're at it. That's the whole idea behind the Loop Ice Carnival, happening throughout the day up and down Delmar (from 6100 to 6600 Delmar Boulevard; 314-727-8000 or www.visittheloop.com). It begins with "Frozen Buns Run" at 10 a.m. and lasts throughout the day. Free. Read the rest of Alison Sieloff's preview here.

"Chugging for Charity" at Cusamano's (Saturday)
There's something for everyone on this list. Do art galleries bore you? Are you jaded with going to concerts? May we humbly suggest that you just drown your boredom (and grouchiness) in frothy bronzey goodness. This week it's $5 admission to the "Beer Fighting Championships" at Cusamano's Party Room (7146 Manchester), and it's for a good cause: Proceeds go to the Wonderland Camp, a special camp in the Ozarks for the mentally and physically retarded. Now you have justification for binge drinking -- this time. Facebook page.

'90s Hip Hop at the Gramophone (Saturday)
The '90s might have been the best decade for rap. After an evolutionary 1980s, but before the  trend-hopping 2000s, the '90s saw rap artists top the charts regularly and underground rappers create music that still influences artists today. Sadly the decade saw icons die due to violence, 2 Pac and Notorious B.I.G. immediately come to mind, but lesser-known artists like Big L also lost their life. On Saturday night remember the greats, get a few drinks in you and eventually end up rhyming along at the Gramophone (4243 Manchester Avenue.) Doors open at 9 p.m .and DJs Chilly C & Oshae will provide the music. Facebook page.

Party For A Purpose 8: A Benefit for Haiti at Exo Lounge (Sunday)
Various players in St. Louis' nightlife scene have collaborated for this party on Sunday night, a fund-raiser for earthquake victims in Haiti. And organizers promise to follow-up with all donors where and how their donations were spent. Exo Lounge, in Midtown, is located at (3146 Locust Street.) Facebook page.