The latest scuttlebutt on the hot stove wire has the Cardinals apparently interested in the services of Jose Valverde. The former Arizona and Houston closer is reportedly being pursued by a trio of clubs, according to Tim Brown of Yahoo Sports, with the Detroit Tigers seemingly the most likely destination at the moment.
Of course, it just wouldn't be an offseason rumor without an immediate contradictory report, would it? Shortly after the Cards' interest was reported, Joe Strauss held a chat and addressed the rumor, saying the Cardinals are not currently "actively involved" in pursuit of Valverde. According to his sources, there isn't room in the budget for such an acquisition.
I will say this: on the surface, acquiring Valverde would seem to make all the sense in the world, at least in a vacuum. He would represent an immediate upgrade, and a marked one at that, over Ryan Franklin at the back end of the Cardinals' bullpen. Sure, Franklin saved 38 games last season and looked all kinds of good doing it at times, but he also fell off badly as the team rounded into the stretch, a fact we would all do well not to forget.
The enduring image of the Cards' postseason collapse is Matt Holliday taking a ball in the, um, breadbasket, but the real goat of that game was Franklin, who had only to get a single out in the next four hitters but failed. Tony La Russa, of course, has expressed on numerous occasions since his confidence in Franklin at the end of the game, but one has to wonder how far that vote of confidence will really carry if Franklin gets off to a slow start this season. 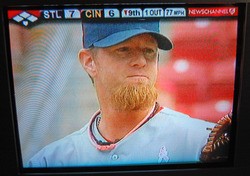 Even at his best, Franklin isn't the sort of pitcher who strikes fear into the hearts of his opponents. Valverde, on the other hand, is. He is every big the dominant force at the end of games the Cardinals have been sorely lacking ever since Jason Isringhausen began his slow slide into oblivion.
The problem, of course, is the Cardinals do not exist in a vacuum, nor do their problems. With what little remaining payroll the Cards have to work with, I think the need to bolster the back end of the rotation will prove to be the more pressing need for the coming year. I have high hopes for Jaime Garcia - probably higher than just about anyone, in fact - but he is still a very, very young pitcher making a comeback from Tommy John surgery. Counting on his to shoulder a full season's worth of innings just isn't all that wise.
Even more importantly, the decision to sign Valverde would necessitate the Cardinals forfeiting their first round draft pick in 2010, as he is a Type A free agent. With as much talent as the Cards traded away in 2009, I feel they need to stockpile as many extra picks as possible to try and bolster what is suddenly a badly depleted system. The extra picks gained from the departures of Mark DeRosa and Joel Pineiro will certainly help, of course, but the value of a pick even at the end of the first round should not be underestimated.
In the end, I don't think bringing in Valverde would be in the club's best interest. He would definitely make the team better, but I think there are other, better ways to improve the club just as much, if not more. If the Cards are concerned about the back of the bullpen, John Smoltz probably represents the best option for an upgrade. Smoltz offers far more versatility than Valverde, as he could fill either a starting or relief role, and wouldn't cost a draft pick to boot. Octavio Dotel could represent a worthwhile option as well, bringing an additional power arm and a wealth of experience to the late innings, again without the cost of a draft pick. Dotel isn't quite as dependable as Valverde, but the difference in performance between the two just isn't worth the lost pick in my opinion.
In the end, I think bringing in Valverde would make a lot of sense for the Cardinals, who find themselves very much a contender, but I think the cost, in both dollars and draft picks, will simply prove to steep.