January 14, 2010 at 8:45 AM
comment
A new study suggests that people who load up on body art are more likely to engage in risky and criminal behavior. 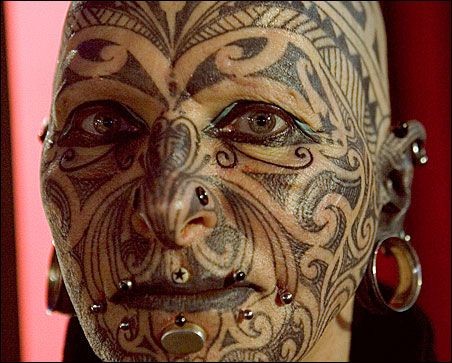 The report reveals that those who get four or more tattoos, seven or more piercings, or one "intimate piercing," are far more prone to use illegal drugs, get thrown in the slammer, drink ungodly amounts of booze, cheat on tests and curse like a sailor.

And, oh yes, they also have more sex than Tiger Woods -- well, almost.

We kid you not.

For the past two years, Jerome Koch, a sociology professor at Texas Tech University, along with his "Body Art Team," surveyed more than 1,750 students at four colleges and concluded that there is in indeed a correlation between multiple tattoos and piercing and socially unacceptable behavior.

The Daily RFT yesterday caught up with Koch, who, by the way, is tattooless and says he intends to stay that way.

Koch will not say which colleges he chose for this tattoo study, entitled "Body Art, Deviance, and American College Students," but hint, hint, two are in Indiana and two are in Texas.

Koch stresses that those with a "low-level of body aret" or what he calls the "rose and dolphin crowd," are not much different than anyone else. But something happens, he adds, when a person goes heavy on the ink.

Says Koch: "They are ten times more likely to have an arrest history, a four-fold increase in drug use, other than marijuana, and there's a five-fold increase in having had nine or more sex partners in the last year."

So what to make of all these finding that will be published in the March issue of The Social Science Journal?

"Well," postulates Koch, "30 years ago, those who had tattoos were part of a subculture, but now it has become more mainstream, and so some people are pushing the envelope in the use of body art in order to be different."

Needless to say, local tattoo artists are rather dismayed with Koch's study.

Tonya Jones, owner of Tattoo City in St. Louis, fumes: "I think it's rubbish. We got a lot of people who are already deviant, well before they come in for a tattoo."