January 13, 2010 at 2:05 AM
comment
Hey, do any of you guys remember Animaniacs? It was a cartoon show back in the early '90s, main characters were the Warner brothers and their sister, Dot? Pinky and the Brain spun off it? Pretty good show, actually. I think it was a Steven Spielberg venture, right around the time Tiny Toons was on the way out. 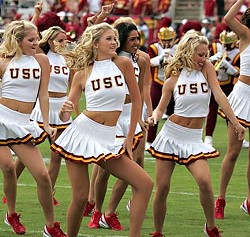 I ask because I was reminded of Animaniacs just yesterday. See, the show followed a variety-type format, with one cartoon featuring the main trio, then two shorter cartoons featuring some of the other characters. Well, one of the supporting cartoons featured a little girl by the name of Mindy, and she was always getting herself into trouble. Just a toddler, she nevertheless managed to find her way into construction sites or sawmills -- that sort of thing. The thing was, no matter what Mindy did, she never got hurt. Her dog, Buttons, would chase madly after her, trying to save her from imminent peril, all the while she would just merrily crawl along as danger narrowly missed her. She would fall off a construction crane, only to have an I-beam coming up below to catch her. An anvil would fall off a shelf toward her, only to miss her and hit Buttons instead as he tried to rescue her. You know, stuff like that.
It wasn't the best segment on the show, to be honest. Pretty basic cartoon stuff, really (Popeye did the same thing 80 years ago), though it was nicely animated. So why am I talking about this? Because I think I've found out what happened to that little girl.
Mindy grew up and became Lane Kiffin.
Lane Kiffin was named head coach of the USC Trojans yesterday, completing perhaps the least deserved rise to the top of the college football ranks of any coach who has ever lived.
See, Lane Kiffin used to be the offensive coordinator at USC, back in the days of Matt Leinart and Reggie Bush, so he was predictably viewed as some sort of offensive genius. Being a genius and all, he was hired by Al Davis to come and turn around the fortunes of the woeful Oakland Raiders. Kiffin immediately became the youngest head coach in the NFL's modern era. Upon his arrival, however, he established a relationship with Davis one could charitably call disastrous. Kiffin was fired just two games into his second season at the helm, and gave Davis quite the kiss-off on his way out, attempting a 76-yard field goal during his last game on the sideline, just to piss the old man off.
Now, one would think after such an embarrassing and public ouster, Kiffin would have been forced to lick his wounds for a while, take a coordinator's job and wait for a head-coaching spot to open up. But no! The University of Tennessee, looking to turn around its own fortunes, jumped at the opportunity to bring in Kiffin and his 5-15 record as a head coach. His hiring was officially announced in December -- less than three months after he and Oakland parted ways.
So hey, he's a lucky guy, right? He goes to Oakland, has a tough time, then lands on his feet in Tennessee. With all that good fortune, you'd think he would have the good sense to just lay low and start building his program. Once again, you'd be wrong.
Kiffin's first major action as head coach of Tennessee was to accuse Urban Meyer of Florida of recruiting violations, during a breakfast event for university boosters. Never mind Florida is the 900-pound orange-and-blue gorilla in your conference, let's just piss in their cornflakes first thing, huh? Kiffin's behavior prompted the SEC chairman to demand a public apology, which the coach delivered -- and in the same speech announced he'd told one of his recruits not to fax his letter of intent from his high school, because he was sure "something" would happen to it.
By the time the 2009 season ended, Kiffin had led his Volunteers to a 7-6 record, with a 4-4 mark in the SEC. Hey, not bad, right? The SEC is a tough conference, and he held his own. Unfortunately, Kiffin also committed at least one recruiting violation along the way, and there have been substantial allegations of others. So, you know, all in all not a terrible disaster, but Kiffin certainly didn't light the world on fire.
Now, what we have here is a coach with a 12-21 record as a head coach, who committed at least one recruiting violation in his one and only season coaching an NCAA team. He pissed off his former boss in Oakland, pissed off his fellow coaches and the conference chairman in the SEC, and just flat-out can't seem to keep his fucking mouth shut to save his life. The sole real positive on his coaching résumé is the 2005 USC offense, which set all kinds of records. (Which, of course, must have been attributable to Kiffin's brilliance, not the fact that team included Steve Smith, Reggie Bush, Matt Leinhart, LenDale White, and Dwayne Jarrett.)
So what does this record of sub-mediocrity, bad behavior and rules violations net Kiffin?
Oh, just the head coaching spot at USC, or course. I mean, why wouldn't he end up there?
Then again, USC isn't quite the dream job it was a couple of years back. Not only are the Trojans coming off their worst season in several years, it appears the NCAA is about to lower the boom on them for -- what else? -- recruiting violations.
Still, I can't help but think of that lucky little girl who just keeps doing the worst thing possible, only to have it all come up roses. Sure, he may have absolutely no track record of success, and sure, he may have abandoned all the kids who signed on to play for him at Tennessee, and sure, he may seem a complete asshat to you or me, but, um, hmph. I forgot what my point was.
So good luck at USC, Mr. Kiffin. Somehow, I can't imagine you'll need it.