January 12, 2010 at 11:40 AM
comment
E. Desmond "Des" Lee, a lifelong Missourian and successful entrepreneur who leveraged his business success to fund arts and education, died today at St. John's Hospital. He was 92. 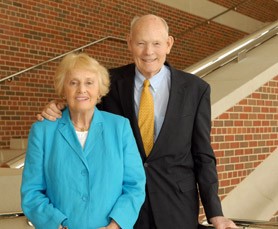 ​According to a press release from his family, Lee gave away in excess of $70 million over the years, most of it to children's organizations. Another favored recipient: the Saint Louis Symphony Orchestra.
Lee was born in Sikeston in 1917 and grew up in Columbia. A graduate of Washington University, he enlisted in the U.S. Army and served as a captain during World War II. After the war he formed a manufacturing company with his father and another father-son tandem. Their first business success: a metal trouser creaser and hanger marketed to department stores.
Lee's legacy includes the Des Lee Collaborative Vision, a foundation that endows chairs at UMSL, Wash. U. and Webster U.
See full press release after the jump.
E. Desmond Lee:  August 6, 1917 - January 12, 2010
Noted St. Louis Philanthropist, Civic Leader
ST. LOUIS, January 12, 2010- E. Desmond "Des" Lee, a retired business executive, philanthropist and civic leader, passed away today at St. John's Hospital in St. Louis after a brief illness.  He was 92.
Beyond his generosity as a philanthropist, he was also a visionary in the ways he gave back to the community, as evidenced by the Des Lee Collaborative Vision - the joint program he founded with three of St. Louis's major universities.  His family and his many friends will remember him for his strength, his determination, his perseverance and his simple love of people.
Born August 6, 1917, in Sikeston, Mo., Lee was one of two children born to Edgar and Bennetta Lee.  He grew up in Columbia, Mo., and attended Washington University in St. Louis on a full scholarship.  Lee was the captain of the university basketball team and earned a bachelor's degree in business administration from what is now the John M. Olin School of Business.  Lee later enlisted in the Army during World War II and served as a captain.
After the military, Lee joined with his father, Edgar, college classmate Jim Rowan and Jim's father, John, to found Lee-Rowan Co.  The manufacturing company's first product was a patented metal trouser creaser and hanger sold to department stores; Lee-Rowan later evolved into a wire-shelving business.  Lee sold the business in 1993 and used the money for his next calling in life:  local philanthropy.
Lee established a long history of giving back to the community, gifting more than $70 million over the years, mostly to children's organizations.  He founded the Des Lee Collaborative Vision, a program that endows professorships at three universities in St. Louis - the University of Missouri - St. Louis, Washington University and Webster University - with the stipulation that the professors agree to spend a significant amount of their time working within the community and collaborating with one another.  The plan benefits not only collegians, but also the entire community, particularly the underserved.
The Saint Louis Symphony Orchestra was another notable beneficiary of Lee's generosity.  In fact, in one of his last public appearances he served as guest conductor for "Auld Lang Syne" to close the orchestra's 2008 New Year's Eve Concert at Powell Symphony Hall.
Additionally, Lee donated to and served on the boards of numerous civic organizations, including the Herbert Hoover Boys & Girls Club, the YMCA, United Way of Greater St. Louis, the St. Louis Science Center, the St. Louis Zoo, the Missouri Botanical Garden, the Missouri Historical Society, Variety the Children's Charity of St. Louis, St. Louis Art Museum, and Ranken Technical College.  He also funded scholarships at a number of local universities.
Lee was named the St. Louis Post-Dispatch's 1996 Man of the Year.  The same year, he also received the Right Arm of St. Louis Award from the St. Louis Regional Chamber and Growth Association, and was awarded the National Outstanding Philanthropist Award in 1997.  Two years later, Worth magazine ranked him one of the 100 most generous Americans.  With his wife, Mary Ann, he received the 2004 NAACP Humanitarian Award.  In 2004, Lee also carried the Olympic flame in the Torch Relay that led up to the Summer Games in Athens.  He also held an honorary doctor of humane letters degree from the University of Missouri - St. Louis and an honorary doctor of humanities degree from Washington University.
Lee was an avid golfer who spent his adult years in the St. Louis suburb of Ladue.  He was a noted train enthusiast, and built a model train that remains on display at the Mercantile Library in St. Louis.  His first wife, Margery Stauffer, passed away in 1977.  His second wife is the former Mary Ann MacCarthy Taylor.
Lee is survived by his wife, Mary Ann Lee; his children Gary Lee (Marilyn), of St. Louis; Christy Pope (Bill) of Aspen, Colo.; and Gayle Lee, of Wickenburg, Ariz; grandchildren David Lee, a professional basketball player with the New York Knicks of the NBA; Elizabeth Johnson (David) of Greensboro, N.C.; Desmond Duggan of Aspen, Colo.; Lyrica Marquez of Nashville, Tenn; and two great grandchildren.  He is also survived by his stepchildren Andrew C. Taylor (Barbara) and Jo Ann Taylor Kindle (Tom), and his step-grandchildren Christine Taylor Broughton (Lee), Patricia Taylor, Carolyn Kindle and Alison Kindle, all of St. Louis, and Kelly Taylor of Delray, Fla.
Funeral arrangements are pending. The family requests that memorial donations be made to one of Desi's favorite charities.
###