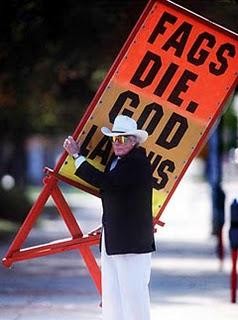 The votes are in and the first Ass Clown of 2010 goes to a man and his followers who are well accustomed to derision and buffoonery.

Forty-one percent of Daily RFT readers last week picked Rev. Fred Phelps and his Westboro Baptist Church as Ass Clowns of the Week. The Kansas-based congregation was supposed to protest the Lady Gaga concert last Thursday at the Fox Theatre but got cold feet when three-inches of snow blanketed the region and temperatures never eclipsed the teens.

Second place with 24 percent of the votes (and my favorite candidates) were the two Rams fans injured last Sunday while fighting for a player's used sneaker.

Check out the full results of the Ass Clown poll here and review all the candidates.