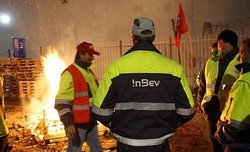 Yesterday, Anheuser-Busch InBev announced that nearly 800 workers in Belgium and Germany -- ten percent of the company's European workforce -- were about to lose their jobs in a cost-cutting measure.

Via the Brisbane Times:


"We are demanding that the (company's) senior managers come here and call off the lay-offs," Marc Devenne, a union representative was quoted as saying by the Belga news agency.

RTBF radio reported that about 10 managers at the plant were being held in a meeting room in an office building located next to the plant.

Now that is a strong union response.

In a somewhat happy ending, Britain-based SkyNews reports that the Belgian plant managers have all been released.