Ending Gun Violence, One Hand of Uno at a Time

January 08, 2010 at 12:54 PM
comment
In the wake of the Gilbert Arenas Situation (I think it merits capitalization by now, don't you?), the New Jersey Nets have decided to ban all forms of gambling and card games on their team flights.
This is a really, really dumb idea. 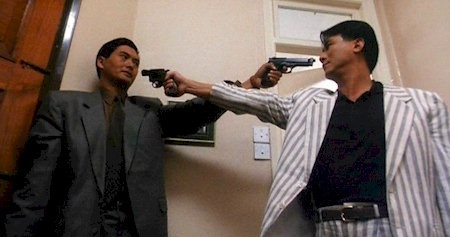 So clearly, what we're supposed to believe here is that the reason Arenas and his teammate Javaris Crittenton are both now facing serious disciplinary action from the league and possible legal ramifications as well is because card games are such a big problem.
How about this: how about both should have been smart enough to just not draw guns on each other?
I realise it's a radical concept and all, but how in the hell does no one see the problem with this? How is it that two supposedly grown men carrying around personal arsenals in an attempt to out-street each other somehow has more to do with card games than the fact the NBA has a real problem with its culture?
Let's try this exercise: say you and a friend of yours were having dinner at a very nice restaurant. White table linens, mirrors all over the place, candles, the works. So the two of you eat your meal, it's delicious, and then the bill comes. Neither or you reach for it, each thinking you got it last time. See, you guys do this all the time, and you always alternate picking up the check. Well, you're pretty sure you got it last time, when you guys ate at that chicken place over on Grand. So finally, you speak up.
"Um, I think I got it last time. Remember when we ate at the Cluck House a couple weeks ago?"
"No, I'm pretty sure it's your turn," your friend replies. "Remember that gourmet wood-roasted pizza place? We got the duck and wild mushroom pie, and I paid for it. Your turn."
"Dude, that was like a month ago. The Cluck House was way more recent than that."
"No it wasn't. I don't even remember going to the Cluck House. You sure you're not thinking of someone else?"
"No I'm not thinking of someone else," you snap, getting a bit irritated now. He always tries to pull this shit when his check is a little short, you think. Probably went to the boat over the weekend and lost a wad, now he's trying to get me to pay for dinner again.
"Well, I don't remember eating at the Cluck House. It's your turn."
"No, it's your turn, dude."
"Hey, don't dude me, dude. I paid the check at the pizza place, and now it's your turn. Pay the fuck up, man."
"No. I paid for fucking chicken last time we went out, and now you're just trying to get out of this shit like you always do, man. So just get out your wallet, put the money on the table, and chill the fuck out. Look, I'll even cover the tip. How's that?"
"I don't need you to cover the fucking tip! I can pay for the shit with no goddamn problem, but it's not my turn! I paid for the fancy pizza, and you're going to tell me you fucking paid for chicken last time and that somehow makes up for it? Even if we did have chicken, that costs like four bucks. That shitty duck pizza cost me like thirty bucks!"
Alright, that's it. Now he's gone too far, you think. I knew he was just trying to weasel out of paying the check. And to say the cost is the reason? What about that time we went to Cardwell's and he ordered the filet for lunch? Who orders a fucking filet mignon for lunch? What the hell, man?
So you stand up, reach into your coat pocket, and draw out your gold-plated Desert Eagle. You point it at your friend's head in the middle of the crowded restaurant, and the place goes silent.
"Now, let's get something straight," you say. "You are paying for that motherfucking lobster ravioli, or I am going to end you. Do you fucking understand me?"
Aaaand, scene.
Now, let me ask you a question. Did your dinner with your friend end up as a scene from The Godfather because a) hey, that's just what happens when you go out to dinner, or b) because you're obviously a complete lunatic.
If you answered a), please write to me so I can place on my list of people to never, ever have dinner with.
But hey, that's what the Nets are doing. They've essentially decided the only way to keep their players from ending up in a Mexican standoff in the locker room is to keep them from playing the card games which lead to said standoff.
And by the way, what real live person carries a gold-plated Desert Eagle? Or a gold-plated anything, for that matter? Sure, it totally works for Tony C (or was it Tony P?), and the Disco Boys, but actual human beings don't carry around gold-plated hand cannons.
Personally, though, I am a little excited about one thing. Banning card games does increase the chances I may one day read this headline:
Game of Scrabble Ends in Deadly Showdown
"Hoboken is a proper noun," says sole survivor
I can't wait.