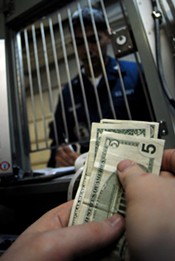 Deb Peterson plates some juicy fixin's today: Ex-con Charles E. Polk, Jr., and several St. Louis cohorts have opened a "prison, sentencing and business consulting" shop in Washington, D.C.
Intended to help white-collar criminals (a growth market, apparently) shorten their federal prison sentences and survive life inside, the firm banks on the hard-won experience of Polk, a former silk-stocking attorney who was convicted of tax evasion and wire fraud in 2006.

Polk did only 22 months of a 46 month-sentence, and now he will teach you how to work the system, too.
Quoth his website:

As a result of Mr. Polk's prior background as a preeminent ("AV") attorney/lobbyist and (as described below) his humbling subsequent experience of being a prison camp resident himself, he is uniquely qualified to help clients navigate the many intricacies, nuances and traps of the criminal justice system. He now knows the system form the "inside and out". Unlike no others, he and the ISA team can draw upon past experiences to help clients get through the process. Mr. Polk has a newfound appreciation for the Nietzsche axiom "What does not kill you makes you stronger." He survived, and with ISA's assistance so will you.


Polk and his partners are adept at assisting criminals in finding the right minimum security camp, because, as his firm puts it, "some Prison Camps are more 'Prison' than 'Camp' and vice-versa. Some Prison Camps have fences and some do not. Some Prison Camp staffs are 'laid back' and some are 'in your face'."

Polk did his time at camps in Leavenworth, Kansas, and Littleton, Colorado. Sounds like he made the most of it.

Always one to make the best of circumstances, Mr. Polk, while incarcerated, through a self-imposed strenuous exercise and diet program, lost nearly 100 pounds, developed a better spiritual connection and totally immersed himself in the study of the intricacies of BOP rules, regulations and the laws pertaining thereto.

Of course, this kind of expertise don't come cheap. Hourly fees clock in just under 500-hondo.