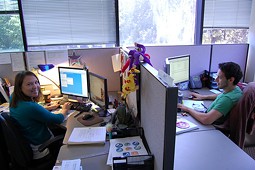 In explaining his decision to move the headquarters of the publicly-traded IT firm Perficient Inc. from Texas to St. Louis, CEO Jeffrey Davis told the Post-Dispatch that "the Midwest work ethic" was a factor.

The Midwest work ethic. We like the sound of that. But is it real?

The federal Bureau of Labor Statistics does keep data on how many hours people work relative to leisure and other activities. But those data aren't broken out state-by-state. or region-by-region.

So Daily RFT performed a different but equally rigorous scientific study: how many mentions of the following phrases appear in major U.S. newspapers, according to the Nexis database?

We have a winner! Midwesterners work harder. Eat it, America.