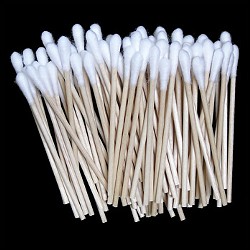 Oh, how we love reading the Madison-St. Clair Record, the newspaper that chronicles the judicial hellholes of metro East St. Louis.

The Record is never in want of a preposterous incredible lawsuit to cover week in and week out.

One of our favorites of last year was the suit in which a man claimed he discovered a mouse in his can of Mountain Dew. (What kind of animal did he expect to find in his soda? An elephant?)

But enough about that. Today we're even more intrigued by another suit winding its way through the St. Clair Circuit Court. It's another of those horrific stories you hear about when Q-tips attack.

This was not any Q-tip, mind you. It was one of those dreaded, wooden Q-tips. According to the lawsuit filed on December 22 of last month, Stanley became sick, sore, lame, disordered and disabled from his run-in with the cotton swab on a stick. Not only that, he also received injuries to his cervical, shoulder and lumbar areas; incurred medical costs; suffered disability; and experienced pain and suffering.

Stanley says the hospital should have warned him about the wooden Q-tip. He's asking for a judgment of $50,000 plus costs for his attorneys.