January 05, 2010 at 8:47 AM
comment
Last week, St. Louis New Years Eve revelers hit the town, dressed to the nines with champagne aspirations, but most would greet the first light 2010 with splitting hangovers and foggy recollections of bad decisions.

But, hey, at least they didn't wind up handcuffed to a hospital bed, riddled with bullets, like one south city carouser.

Perhaps disappointed with anemic party poppers, a 22-year-old man stepped out of his home on the 4600 block of Idaho Avenue to ring in the new year with something a bit more energetic -- a handgun.

Neighbors said the man fired at least six rounds into the air. The police showed up quickly thereafter.

At 12:01 a.m., two uniformed police arrived at the house responding to a "shots fired" call. The suspect was coming out of the back door when the officers told him to drop the gun.

Instead, the man opened fire at the police, who fired back and hit the man twice: once in the hand and once in the torso, according to reports. Another bullet caused a minor cut as it grazed his head.

When the police entered the man's home, several people bolted out of another door, leaving behind a four-year-old boy. In the confusion, the child stepped out into the street and was hit by police car arriving at the scene.

The toddler suffered only minor injuries; while the shooter was taken to the hospital (reports state he is in stable condition.) Neither officer was hit.

The shooter must have forgotten fundamental physics -- what comes up, must come down.

It's a simple principle that somehow fails to enter the minds of some overly enthusiastic celebrants before they head out to the front lawn to send some parting shots at the previous year. 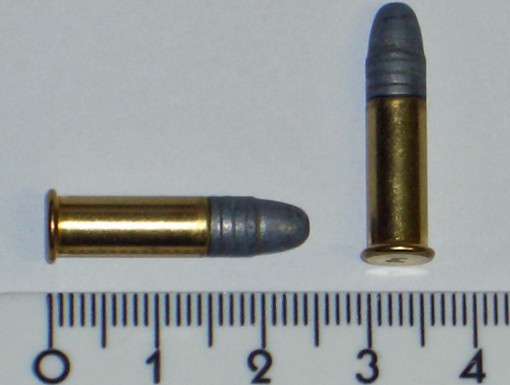 A .22 Long Rifle round (used primarily for target practice and pest control) fired horizontally, can travel a mile and a half if its path is uninterrupted and wind conditions are favorable. Some ammunition can travel up to five miles. Of course, the effectiveness of these rounds is much shorter than their total possible distance, with only high-powered rifle rounds capable of delivering a lethal blow at greater distances.

But, when gravity factors into the equation, bullets fired into the air can return to earth with devastating speed. After the initial burst from ignited powder, bullets slow down due to wind resistance and gravity. If that bullet is fired at an upward angle, though, the initial energy gets a gravitational boost as it hits the apex of its arc and begins to fall.

In fact, injuries from falling bullets have been shown to have higher mortality rates than injuries sustained in typical gun shot wounds. A study conducted by the Department of Emergency Medicine at King/Drew Medical Center in Los Angeles found that falling bullet injuries are fatal in 32 percent of cases while "normal" gunshot wounds only kill two to six percent of the time.

While the events on the south side failed to hurt anybody beyond the site of the shootout, celebratory gunfire killed a four-year-old boy in suburban Georgia. Marquel Peters was attending a church service when a bullet fell through the roof, striking him in the head.