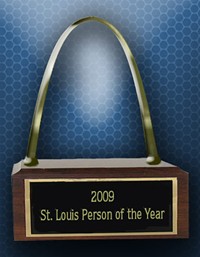 Now that 2010 is afoot, St. Louis Mayor Francis Slay wants your take on the biggest news-makers of 2009, a la Time magazine's "Person of the Year".

In his weekly poll released today, Slay asks you to pick from his pre-fab list of last year's biggest game-changers.

From the smoking ban's passage, to KFUO being sold, to St. Louis Cardinal Albert Pujols winning the MVP, the list hits all the bases, while slighting the St. Louis Post-Dispatch, touting downtown and elbowing the St. Louis Metropolitan Police Department. Yes, George Clooney makes the cut.

So if you're an astute consumer of news, there's one whopper of a potential game-changer in there that might have jumped out at you.


Hizzoner has been chatting it up with mayors in other cities that have hosted political pow-wows, says his flack, Kara Bowlin. But Bowlin says she doubts the city will make a bid this time-round.

According to DemConWatch, St. Louis was invited to bid for both the 2004 and 2008 Democratic party conventions.

The RNC has a handful of cities preening for its attention. Facebook groups already abound for "2012 in..." Cleveland, Cincy, San Diego, Atlanta.

Seems like a St. Louis bid for either shindig would be a no-brainer.

Of course, there are requirements. Denver had to satisfy a seven-page laundry list to get the 2008 DNC convention.