January 04, 2010 at 1:27 PM
comment
The Bull's Eye indoor shooting range lies on a desolate stretch of Manchester Road just west of Kingshighway. It's a landscape of rail yards, chain link, barbed wire and rust punctuated only by the dingy white cinder blocks that house the Bull's Eye.

In other words: a perfect backdrop for the firearm popularized in film as a symbol of America's urban decay. That's right. We're talking about Israeli Military Industries' 9mm Uzi. 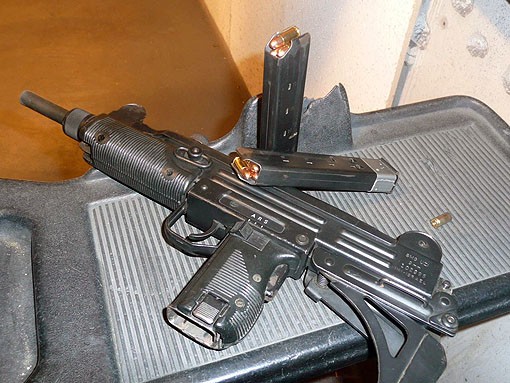 The Uzi's been featured in Boyz in the Hood, Casino, Menace II Society, Death Wish 4 and 5, and, of course, Terminator (in the scene in the gun shop when Arnie asks to see the "Uzi 9 meeluhmeetah").

In reality, the Uzi's seen more action in the Sinai desert than the streets of South Central. Named after Israeli Defense Forces Capt. Uziel Gal, the submachine gun was used extensively in conflicts between Israel and its neighboring nations. The Uzi's small size and high rate of fire made it an ideal weapon for clearing bunkers and serving as a sidearm for tank crews.

It's been the gun of choice for the chosen people for over 50 years.

"It's a fighting weapon designed for combat," says Jimmy Wolford, an employee at Bull's Eye shooting range. "It's light and it's easy to carry."

Wolford adds that renting an Uzi is rare in St. Louis. While Top Gun rents an MP5, Bull's Eye is the sole renter of the 9mm.

Bull's Eye rents its fully-automatic full-size Uzi for $20 an hour for non-members, although the nationwide ammunition shortage makes the rental an expensive proposition.

The shortage (due to heavy demand from the wars in Iraq and Afghanistan, and increased paranoia following the election of Barack Obama) has caused ammo prices to surge anywhere from 15 to 100 percent in the last year.

That increase can add up lightning-quick when a gun chews up 600 rounds a minute.

Out on the range Wolford gave a little advice for the best way to blow 100 bucks.

"Get in a combat stance," Wolford says, "The more you lean forward the easier it is to keep the shots centered."

The Uzi's recoil is negligible but the muzzle tends to rise up during rapid firing.

"If you start leaning back you're going to be off the paper and hitting the ceiling," Wolford adds, "And you're not going to be out on the range for long doing that."

The gun's old, the finish has scraped off over the years revealing the steel underneath. Wolford even calls it "finicky," and that's the last thing you want to hear when handling a lethal weapon. On the range, though, it's smooth, burping bullets with buttery ease.

The Uzi effortlessly slung round after round out of the barrel, through the center of the target and into a pile of accumulated lead that must've dated back decades. Shell casings tinked to the concrete floor; a "Carol of the Bells" to the black powder's "Little Drummer Boy."

The target returned to the stall with a plum sized hole absent from its midsection.

Sure, the holidays might have passed, but it sure felt like Christmas in Bull's Eye's smoky bunker.
Matt Blickenstaff occasionally blogs about St. Louis gun culture for Daily RFT. He also has his own blog.