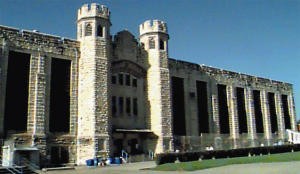 Ah, if only the walls of the old Missouri State Penitentiary in Jefferson City could talk! Well, OK, most of the stories would probably be kind of dull, and the vocabulary might be a little less than savory, but the fact remains: The 177-year-old prison has housed lots of famous folk, like Sonny Liston, James Earl Ray, Pretty Boy Floyd and "Stagger Lee" Shelton.

The old pen closed in 2004 and has remained empty ever since. But what better use for an old jail than as a place for people to go shopping?

On Monday the state adopted a redevelopment proposal for the 140-acre site. The building will house state offices, commercial and retail establishments, housing and a museum of the prison's long and illustrious history. Two state buildings already sit on the property and a new federal courthouse is slated for completion in 2011.

Click here for a PDF map of the prison site, including the proposed zoning.

John Landwehr, mayor of Jefferson City, told the website Missourinet that he hopes to eventually build a community there, not just a venue that opens at 8 a.m. and closes when it gets dark -- hence the plan for housing.

Well, where would you rather live, on the site of an old ballpark or in an old prison?