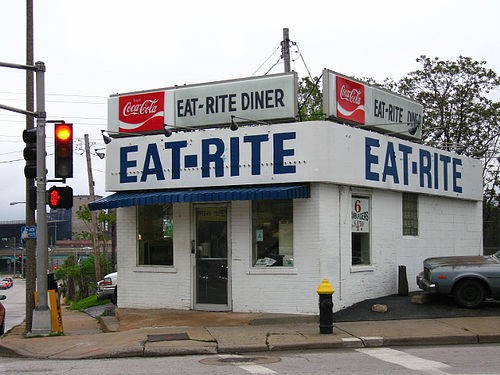 Shevette Chambers shared a meal August 16 with known thug D'Angelo Tate and several other people at the popular downtown diner, Eat-Rite. Upon leaving the restaurant around 3 a.m., Tate's girlfriend showed up in the parking lot and confronted her hubbie about being with Chambers. The two women got into an argument that ended when Tate allegedly pulled a gun from his waistband and fired four bullets into Chambers, leaving her dead.


9. Man Beaten to Death by Female Couple in Forest Park

Willard Bryant Payne, 26, went to Forest Park on June 15 to smoke a joint with two women he'd just recently met -- Dawn Fulks and Mellonie Jones. When Payne made a verbal sexual advance toward Fulks, Jones (described by police as Fulk's girlfriend) became enraged and allegedly hit Payne. Payne tried to run from the women but they caught up with him and continued the beating. Payne's body was found at 6:41 a.m. by people driving near the park. He was pronounced dead at the scene, a victim of blunt force trauma.

8. Woman Charged with Stabbing Ex-Boyfriend to Death
Arlanda McCelleary, 41, of the 3600 block of Gasconade in south St. Louis city, was charged with stabbing her ex-boyfriend Van Johnson, 49, on the first day of December. Johnson apparently suffered for nearly a day in McCelleary's residence, because police didn't get a tip about the stabbing until the next day, at which point they obtained entry into McCelleary's residence and discovered the victim still alive.

Johnson, of the 1000 block of Renshaw in north county, was rushed to a hospital where he died of multiple stab wounds.

The body of 15-year-old Leonard Hollis was found July 29 in a home at 1109 N. 44th Street in East St. Louis. Hollis was murdered shortly following an argument with an acquaintance over a pair of Air Jordans that Hollis had lent to his alleged murderer and were not returned.

6. Eighth-Grader Murdered While Working Alongside His Father

Michael Goulbourne, an eighth grader at Normandy Middle School, was killed while working alongside his dad at the family's "Mi Hungry" food stand on N. Kingshighway on May 8. The fahter and son were closing up shop around 8 p.m. that day when four armed men pulled up in a Pontiac sedan and demanded money. Goulbourne and his father handed over cash and jewelry, but that wasn't enough for the gunmen who shot them point-blank as they fled the scene. Goulbourne, 14, died immediately. His father survived a gunshot wound to the hand.

5. Man Kills Murders His Cousin and Her Boyfriend with Crowbar

Reginald Frazier was staying with his cousin, Michelle Renee Gowder, and her boyfriend, Willie Murphy Ward on July 17 when Frazier allegedly left the home to go buy drugs. Upon his return, he was confronted by Gowder who said she planned to tell her boyfriend of Frazier's drug use. Police believe that Frazier then hit his cousin several times in the head with a crowbar. Next he entered the bedroom and beat Ward as he lay in bed. Frazier then dragged his cousin into the bedroom and continued bludgeoning both victims until they died. Police discovered their bodies several days later when a relative called to request that the police check on their well-being.

Brandon A. Whitby, 20, was charged in August with first-degree murder for the death of his girlfriend's two-year-old son, Malik Duff. Duff was pronounced dead August 1 at a local hospital after being brought there unresponsive. An autopsy performed on the child determined the cause of death to be blunt force trauma. During the investigation, Duff's nine-month-old brother was discovered to have visible marks on his face and body, as well as internal injuries. Whitby is accused of striking the nine-month-old boy with a belt and causing Malik Duff's death by beating him. Further investigation revealed a loaded handgun and heroin within reach of both children inside the residence in the 1100 block of East Linton. The gun was stored inside a toy car. The heroin was stored under a mattress.

3. Man Kills Lover, Chops Up Her Body, Conceals Remains in Trash Can

Vernell J. Loggins Jr., 37, was charged November 4 with killing his girlfriend and dismembering her body inside the couple's apartment in Pacific. A maintenance worker at the Monroe Woods Apartment complex discovered the remains of Stephanie M. Fields under bags of ice and bloody towels in a trash can that had been glued shot. Fields family had to rely on tattoos to identify her dismembered body.

2. Man Executes Ex-Girlfriend and Two of Her Friends Inside a Vehicle Full of Three Children -- One of Them His Own

Milton Lattimore, 21, was charged last month with killing his ex-girlfriend -- Jaimaca McDaniel, 24 -- and two of her girlfriends -- Tenika Harvey, 26, and Raykel N. Gathing, 26 -- at an East St. Louis gas station. McDaniel had two of her three children with Lattimore. The women were gunned down inside their parked vehicle that also contained one of Lattimore's children with McDaniel and two other kids under the age of eight. None of the children were injured in the shootings, though McDaniels reportedly took a bullet by diving in front of one of the kids.

1. Church Security Guard Accused of Strangling His Wife and Children

Columbia, Illinois, police uncovered a grisly scene back on May 5 when they arrived to the home of Christopher Coleman and found his wife and two young boys murdered in their beds. Coleman claimed to be working out at the gym at the time of his family's early-morning killings and suggested that the murderer could be a stalker who'd sent threatening letters to the family. Investigators, meanwhile, believe Coleman is to blame and say he sent the threatening letters to himself as part of an elaborate theme to kill his family and marry his mistress.