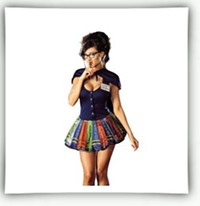 If you thought the decade would end without some national ranking flipping the bird to our fair city, well, you've had your fill of the Christmas Kool-Aid, now haven't you?
Party's over, kids. Put on your reading glasses and weep: St. Louis has netted the number-eleven spot on a ranking of the nation's most literate cities!
That's right, folks, we fall in line behind the bastions of smartyness that are Pittsburgh (# 4) and Atlanta (# 5), but ahead of the intellectual ghettoz that are San Francisco (# 12) and Cleveland (#13).
Ah, well. At least we didn't have to share our berth, like Tampa (#20.5) and Tulsa (#20.5).
The ranking is compiled annually by a professor at Central Connecticut State University, a public school in New Britain, Connecticut. (Please!)
Dr. John Miller scores U.S. cities by crunching stats on nerdy shit like newspaper circulation, number of bookstores per capita, education level and "internet resources" (Internet book orders per capita, visits to and views of the metro newspaper's website).
We fared poorly in the ladder category, and equally dismally in the education-level roundup.
On the other hand, we kicked ass in the "library support, holdings & utilization category," pulling down the number-two spot.
Which makes us think that we should start the next decade on a different foot, get proactive with our PR and really start applying ourselves to bettering our national image.
Let's start some of our own rankings: Hot Librarians... Dirtiest Exotic Pet Breeders ... Sexiest Carjackers ...