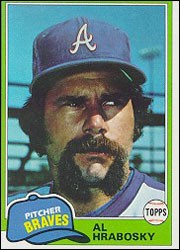 So it looks as if Al Hrabosky will continue to pollute the airwaves for at least one more season. He is apparently close to signing a deal with Fox Sports Midwest to once again broadcast games alongside Dan McLaughlin for the 2010 season. Thus the circle remains unbroken, and we are all forced to listen to godawful broadcasts again for another year.
Can you hear my depression settling in for a nice, long stay?
For me, this basically represents the worst-case scenario. Back at midseason, when Hrabosky was fighting with Tony La Russa over bashing Yadier Molina's lack of hustle, I thought we might finally have found a way to get rid of the Mad Hungarian: get the Mad Italian pissed at him. Unfortunately, it now appears that isn't going to happen, and I find the whole thing just very unsatisfying.
The thing is, it was probably one of only two or three things All said all year I actually respected; Molina was clearly loafing, and Hrabosky called him on it. Then the manager jumps down his throat, and it seemed as if a truly wonderful slice of irony was about to be doled out: Hrabosky spouts asinine, nonsensical bullshit every damned day, and his job remains safe. He finally says something really smart and valid, and he gets fired for it. Don't get me wrong; it would have burned my ass for La Russa to have gotten away with something like that, and I would have written angry op-ed pieces about twice a week for months, but still. It just might have been worth it.
As it is, though, we get none of the good stuff here. No delicious martyrdom for Al, having been crucified for daring to attack one of the Cardinals' sacred cows. No, the whole thing just slowly collapses like an undercooked souffle', Al comes back, and we get all banality, all the time.
Oh, well. Maybe if we're lucky Jack Clark will finally get that one last facelift that pushes his skin too far this year and he'll explode mid-broadcast, drenching Ricky Horton with a fine mist of bright orange flesh and collagen. One can always hope, right?