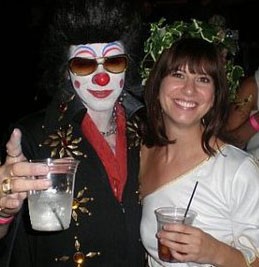 ​This week the Internet social review site Yelp formally announced that they've hired Abby Schwarz as their new community manager for St. Louis. Abby has been an active Yelp user since 2008 and applied for the job on a whim.
If you've never used Yelp before, it's basically a review site where users can log on and drop a few lines and give a rating about local businesses. It's a particularly popular place to review restaurants, but users can review almost any kind of local business. Like many modern web services, there is a social side to Yelp allowing users to make friends with other reviewers and rate reviews. There's also a daily "Review of the Day" that gets featured on the front page.

As you might imagine, Yelp has been both a blessing and a curse to some businesses depending on their favorable or unfavorable ratings on the site. Some businesses have even used the negative reviews they've gotten on Yelp to their advantage like Pizzeria Delfina in San Francisco, which made headlines last year when they had their worst reviews on Yelp printed on T-shirts for their employees to wear on the job.

So what does a Yelp community manager do? That's what we were wondering so we shot an email to Ms. Abby Schwarz to ask about her responsibilities and how she landed her new job. Here is how she responded via email:

The process was pretty lengthy, consisting of several phone interviews with the Regional Marketing Manager (who is stationed in Chicago), the National Marketing Manager (also out of Chicago) and a few senior Community Managers in other cities. Then the Regional Manager flew to St. Louis to meet me. Once that happened, she had me speak to the COO in San Francisco over a quick conference call and I was offered the job the next day.
The position is actually a full-time, salaried gig. I put in notice to my recruiting job back in early November and helped to find my replacement. So now I work remotely from home -- there is no Yelp St. Louis office. Most Community Managers work from home, except those in San Francisco (HQ) and New York. It's taking me awhile to adjust, but they have a pretty regimented schedule. And I love working in my p.j.'s! Right now, my job is to stay active in the community, forge relationships with business owners, encourage people to Yelp, start drafting up some Weekly Yelps, which start circulation in January, gather together a Yelp Elite Squad for 2010 and serve as a Yelp role model for the STL site.
It's an exciting job, but definitely takes over your life! Mike [Mike Tomko, her boyfriend] says I have "freelancer complexion" (i.e., you can tell the days when I don't leave the house...all pasty and white!) and there is temptation to be on the laptop all day. But Yelp encourages all of the CM's to get out and have a life.