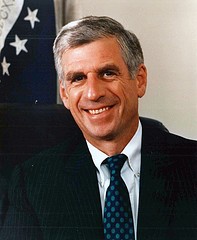 Christmas came about nine days early to Washington University this year when the Danforth Foundation donated $30 million to establish a new center to examine the role of religion in politics in the United States.

The new center, called, unsurprisingly, The John C. Danforth Center on Religion & Politics, will open next month. It will hold conferences to discuss the effect of religion on local and national politics and, once it recruits five new faculty members, offer interdisciplinary courses and an undergraduate minor.

"Few issues are more critical to the well being of a democracy than how religious beliefs -- or the denial of such beliefs -- co-exist with civic virtue and of how the 'truths' of the one are made compatible with the toleration and good will required by the other," said John C. Danforth, the center's namesake, in a press release. "Historically, the responsibility for this kind of dialogue has most often been left to universities with religious connections," he added. "But great non-sectarian institutions like Washington University combine rigorous academic standards with traditions of civil conversation, and that's why this is the perfect place for such a center."

Danforth is both a former United States Senator and an ordained Episcopal priest. A Republican, he has, in recent years, become concerned by how the Christian right has come to dominate his party and, in 2006, wrote a book called Faith and Politics: How the "Moral Values" Debate Divides America and How to Move Forward Together.

Though the Danforth Center will be based in St. Louis, it will also work with the Brookings Institution, a nonprofit public policy research center in Washington, DC. Wash. U. re-established a working relationship with Brookings last April. (Think Brookings Hall.) Indeed, its founding was announced this morning at the National Press Club.

Wayne Fields, an English professor who is an expert in political rhetoric, has been appointed the center's founding director.

"Most leading scholars -- and increasingly more and more of the general public -- recognize the profound and complicated relationship between religion and politics in America," he said in a press release. "This relationship was acknowledged by America's founders as both an enormous advantage to a democratic republic and a challenge to a society committed to individual rights of conscience and belief."