A Fond Farewell to Richie Incognito 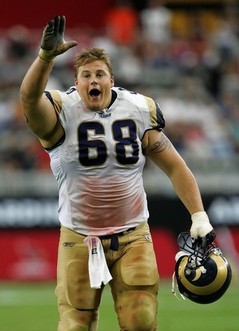 How will St. Louis remember the Richie Incognito era?
I guess none of us ever thought this day would really come, and now that it's here, I wonder if the city will be able to handle it. The final straw came Sunday, when Richie received two, count 'em, two penalties for head-butting opponents.
Personally, I believe I'll remember the good times. The times when Richie made it almost impossible not to write something at least mildly entertaining, thanks to the outrageous stupidity of the act and the player. I'll remember him being named the NFL's Dirtiest Player earlier this year by the Sporting News and being proud of his new title, seemingly ignorant of the fact it wasn't an award.
I'll remember all the personal fouls, all the unnecessary roughness penalties. All the times he stepped on an opponent's limb as he was leaving a dog pile. I'll remember each and every fifteen yards he set the Rams back in his five-year tenure in the Gateway City.
I'll remember the time he executed a flawless elbow drop on a 93-year old woman in the front row at the Edward Jones Dome and then screamed at her she couldn't handle a trip downtown with the 'Nito Man. Or that time when he received an unsportsmanlike conduct penalty for biting a defensive lineman on the ass. Or the time he beat up the Buccaneers' mascot and then shit in the poor guy's oversized foam head just for good measure.
Ah, memories.
Unfortunately, what I won't remember about the Richie Incognito era in St. Louis is anything even beginning to resemble productive play. Since the day he was drafted in the third round by the Rams, Incognito has been nothing but a boil on the ass of this team. Thank god someone finally got around to lancing it.
Surprisingly, Richie actually took his walking papers with significantly more grace than he ever played the game, though he did say he felt as if leaving St. Louis was, "a great weight off his shoulders." He didn't try to murder Steve Spagnuolo, urinate on any beat reporters, or go on one of his slow-kid tirades and dry-hump a passing towel girl. So all in all, he left on a surprisingly positive note.
Still, the end of the Incognito era leaves me with a profound sense of something. Something I can't quite put my finger on. It isn't quite sorrow, and it isn't quite joy. I'm pretty sure the French have a word for it, but I'm not sure I do. But seeing as how I'm a wordsmith and all, I suppose I'll do my very best to find the words to express what I'm feeling. Here goes.
Fuck off, Richie.
Huh. Actually, that seems just about right. I suppose I did have the words after all.