"I was a witness to 20 murders. I dug ten holes. I had to dig one up." Goodfella Henry Hill Talks

One day after his arrest for disorderly conduct in Fairview Heights, Illinois, former wiseguy Henry Hill, whose life story inspired the film Goodfellas, agreed to sit down and chat with the Daily RFT.

Daily RFT: What did Goodfellas get right?

Henry Hill: Ninety-five percent of it. Marty [Scorsese] did an amazing job. Watching my life portrayed on the screen - and accurate - it was surreal.

What did the movie get wrong?

Nothing major. They had to combine three or four characters. Like, I had two girlfriends [laughs]. Things like that. I'm glad it wasn't the way they do Hollywood gangster movies. The kids that watch it, they're so fascinated. It's not like that.

How was the real wiseguy life different?
You don't sleep as good at night. I have a conscience, you see. I never personally murdered anyone. I was a witness to 20 murders. I dug ten holes. I had to dig one up.

How did you get into it?

I'm from a blue-collar neighborhood [Brooklyn, New York]. My father -- he was a good provider, we had eight kids, it was an Archie Bunker house. But when those people moved in across the street, and I seen the limousines, and I was so impressed, it just took hold of me. I thought I was a poor kid, even though I wasn't. These guys walking around with two girls on each arm, diamond rings the size of quarters, yachts. And at 12 - 13 years old, I was washing their cars, doing minuscule things. But it was addicting.

It's always personal in that world. I'm telling you, you make a pass at a guy's girlfriend...They say it's about respect, but people don't respect you. They fear you. They fear what you're gonna do to them. That's not respect.

And that led to you becoming an informant?

You gotta understand, there was a time in my life I woulda put a .45 in my mouth and blew my brains out before becoming a fucking stool pigeon...When I made the deal with the government, you tell one lie and they come down on you. Every time I told them the truth, they opened another case, they had enough info to put a wiretap on this or that, so it wound up ten major cases in New York. And the press ate it up.

And that's when you started working on the book Wiseguy with writer Nick Pileggi.

It took us six years to write that book, because of the appeals and all the other stuff that was going on, we kept getting extensions. Nick had to edit down from 600 pages to 300.

Did you have trouble remembering everything that happened?

No. I wish I had a bad memory.

At the time, were you fearing for your life?

Right there during the trials, [the Lucchese family] came to my brother and offered $2 million to give me up.

What was the worst part about being in the Witness Protection Program?

I had a little discipline in my life because I was in 82nd Airborne. But they [the federal agents] were totally ridiculous. My ex-wife Karen couldn't call her mother. It was really hard on my children, changing names and coming up with a new past every time we gotta move. It was difficult more on my family than on myself. The first place they moved me was Omaha, Nebraska. There was a racetrack within walking distance!

I've lived in California since 1984, and I must've moved six times just in California because of security breaches. A couple times they wanted me to set up the guys [coming after me] but I wouldn't do it.

I was the poster boy for witness protection. I used to go to Washington D.C. and give lectures to new agents who were going into organized crime. I'd spend four or five days giving lectures to sixty or seventy agents. And ten years ago these guys were shooting at me, and now they're getting up and applauding me. It was so fucking weird.

Since leaving the program, have you ever feared for your life?
You always fear for your life, but I fear more some whacko kid coming up to make a name for himself. Look what I do for a living. I make personal appearances at the Hustler Club.

I ask because there are some jaw-droppingly aggressive threats directed at you that you've posted on your website.

Oh that's -- those threats are not worth a grain of salt, most of them are 13-year-old kids from Iowa, sitting at a computer.

Any thoughts on the current state of organized crime?

It's a lot different. Years ago, the Italians were by themselves. Now there's a lot of competition. But [the Italians] are still as vicious as ever.

Is there anyone even left in the Lucchese crime family or other families for you to worry about?

Oh it's active. But I've had six active wiseguys -- active -- come to me with a treatment or a script, saying, 'Henry, can you give a hand with this?' Don't ever move to Hollywood, kid. There's more fuckin' people full of shit. Everybody's a producer. And I can spot 'em a mile away. And I got burned a lot of times.

Now I work on scripts. I got three or four scripts out there. I just did three completely separate TV shows. One is about just my life today. We have a cooking show in progress, of me going to Italy to different regions and cooking the food of that region. I've been this fucking close so many times to big money...

You're selling your paintings at Larry Flynt's, right? 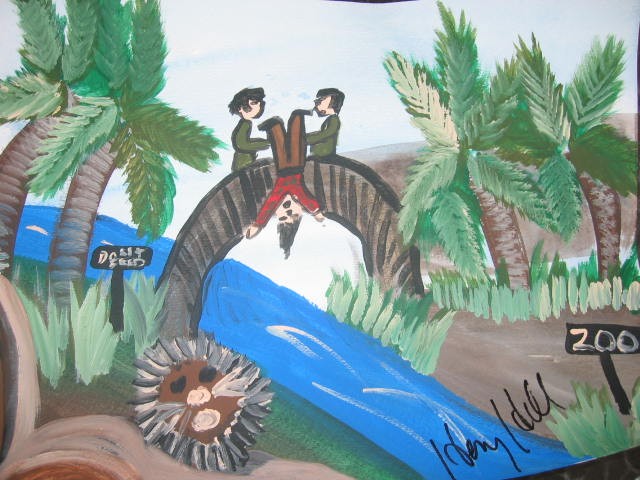 Yeah, I don't charge a lot of money for the paintings. Like 35 - 40 bucks. I got into painting in early '90s when I was in prison, I like to do watercolors. It relaxes me, it's like cooking, it takes me out of my head. Cooking and painting -- it's better than a psychologist.

You've had substance abuse problems over the years?

The doctors are amazed at all the shit I've put my body through. I'm 66. I haven't done drugs in seven or eight years. Sometimes I'll tip one back.

Have you had problems with drinking?

How long have you been sober?

You know, I try to do a lot of -- my girlfriend Linda died of cancer, I do a lot of things for cancer charities.  I try to mentor children, I just did a thing, it's like Boys' Town, out in California. There's a 106 kids from 12 years old to 17, and I do a lot of that. I think I get more out of it than the kids. If I could just save one of those kids from going to prison, or having a .45 to his head, that's enough.

What does it feel like today to look back on your time in the mob?

I wasn't a nice person. And a lot of times something will pop up, I wonder how a guy's doing today, how his business is going. There's a lot of things I wish I could change, but I can't. I can't change my past. But I can try to help and improve the situation today.  I can change today.