Video: How Do You Sterilize 200 Suburban Deer? Like So...

Last week the municipality of Town & Country launched a "deer management plan" aimed at depopulating the 800 or so deer known to wreak havoc on the otherwise sleepy St. Louis suburb.

The "plan" -- which was recently bumped up to rid the community of even more deer -- calls for sharpshooters to kill 200 of the creatures and conservation officials to sterilize another 200 female species.

The city has worked with residents to install feeding stations in backyards from which marksmen in deer stands can take aim at the beasts. That part of the "plan" seems simple enough. But how do you perform 200 in-field sterilizations of female deer?

For that we turn to the Missouri Department of Conservation, which yesterday provided Daily RFT with the following video clip of the process.

P.S. Did you know deers "moo" like cows when frightened? It's true!


P.P.S. What's up with those deers at the end of the video? Are they supposed to be post-op Bambis? 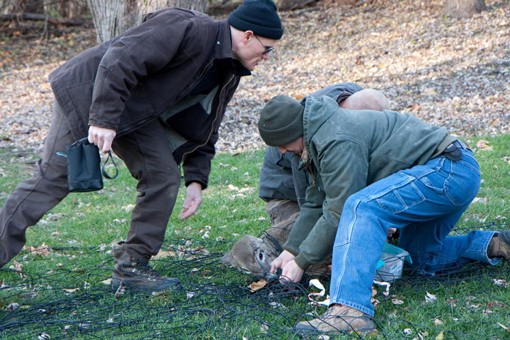