So Now You Want to Read Some Yaoi 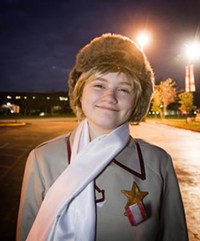 You've read this week's feature on Bishie Con and now you want to read some yaoi. Where to begin?

Sarah and Anna, custodians of the Bishie Con manga library, recommend you start by searching the Internet. The Borders in Brentwood also has a large manga section for your browsing pleasure. But if you lack the patience to blunder through on your own, here are some of the more popular yaoi series.

Ouran High School Host Club: Poor, brilliant, androgynous Haruhi Fujioka is a scholarship student at super-snotty Ouran High School. Through a series of misunderstandings, she becomes an indentured servant of the school's host club, a group of attractive boys who host afternoon tea parties and lavish attention on their female classmates...for a small fee. (This isn't nearly as sordid as it sounds.) Even after the host club finds out Haruhi's really a girl, she's allowed to remain a member, disguised as a boy. This provides some of the story's yaoi elements (Tamaki, the host club's leader, has a crush on her), but the rest come from twins Hikaru and Karoru Hitachiin who seem to display slightly more than ordinary fraternal affection. 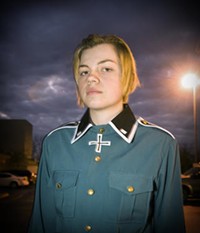 Hetalia: Axis Powers: Described as the Schoolhouse Rock of yaoi, Hetalia tells the story of twentieth century world politics with each country portrayed by a pretty boy. (Except for Hungary. Hungary's a girl.) There's no sex, per se. Instead national alliances turn into crushes and romances (though it must be said that Austria's relationship with Italy, pre-World War I, comes across as slightly sado-masochistic). Read. Watch.

Gravitation: An actual romance! With sex! Chronicles the relationship of seventeen-year-old aspiring rock star Shuichi Shindou and twentysomething romance novelist Eiri Yuki, who are drawn together by an attraction so strong, it's almost like a force of nature (hence, the title). Read. Watch.

Yaoi Press: All these titles come with parental advisory stickers on the cover. Make of that what you will. This is the publisher of Happy Yaoi Yum Yum. This is the dirty stuff, if that's what you're after. Publisher Yamila Abraham's master plan is to sell an all-yaoi Kindle, but that's still in the very early planning stages. 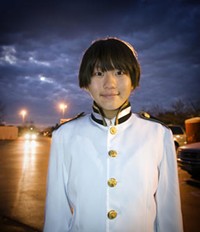 Slash fiction also had a strong presence at Bishie Con. If you want to read about familiar characters in unfamiliar romantic pairings, the Whispered Words database is a good place to start. Slash fans recommend their own favorite slash stories, and the assortment is huge, ranging from the Bible (Michael/Lucifer) to P.G. Wodehouse (and if Wodehouse ever wrote a story where Bertie Wooster and his faithful butler Jeeves got it on, this is probably exactly how it would, uh, go down). And of course Harry Potter. Because you haven't really read slash until you've read about Lupin and Sirius.

Bear in mind that just about everything is slashable. The only person who seems immune is Abraham Lincoln, though our search was by no means exhaustive. Even Hitler gets the treatment. (Link truly disturbing and probably NSFW.)

M/M (that's male/male) romance novelists Katrina Strauss and Jessica Freely showed up at Bishie Con, too. M/M romances initially capitalized off the popularity of Brokeback Mountain, but they have more in common with heterosexual romance novels, namely, happy endings (in more ways than one). Most M/M, including Strauss and Freely's work, is only available in e-book form, though Running Press has started to publish some historical romances. (Unreal read the first one, Transgressions, and did not like it. According to Freely, its successors are much better.)