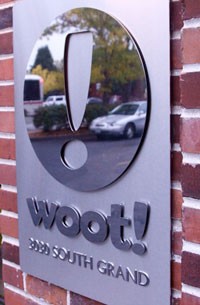 The site was in beta for several weeks before its launch late last month. It's the latest site in the Woot family of e-tailing sites. Besides the parent site Woot.com, which we profiled a few weeks back, there are sites for wine, shirts, kids, and "Sellout" -- a partnership with Yahoo. Most of these sites are managed from offices located above the Sekisui Japanese restaurant on South Grand.

How exactly does Deals.Woot.com work? It's pretty simple. Users submit deals and other users vote the deals up and down. The deals are then listed in order of popularity on the site. The most popular deals rise to the top. There's a leader board to keep score of which users submit the best deals, which deals rise the fastest, who votes the most, and what questions users are asking most.
Still confused by the complexity? The Woot communications department made this video just for you: