Doe v. Young Returns! Because There's No Such Thing As Too Much Pannus 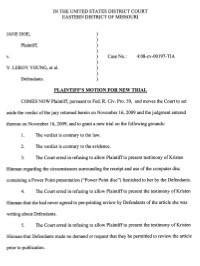 Two weeks after a federal jury decided that a trio of local cosmetic surgeons must pay his client $100,000 for having supplied photographs of her to Riverfront Times, attorney Richard Witzel has filed a motion for a new trial in the matter of Jane Doe v. V. Leroy Young, et al.
​The case stemmed from "Sultan of Skin," a 2006 RFT feature that included a pair of small before-and-after photos of a woman's midsection, illustrating a surgical procedure known as a panniculectomy, which does away with excess skin left on one's body after dramatic weight loss.
The photographs were supplied to the paper by Dr. Leroy Young's Chesterfield-based medical practice, BodyAesthetic Plastic Surgery & Skin Care Center.  Witzel, Doe's attorney, argues in his motion that athough the jury in Doe v. Young found that the partnership had breached its fiduciary duty to its patient by disseminating her photos without her consent, the trial was irreparably compromised because the defendants were permitted to claim they had entered into an agreement with the story's author, Kristen Hinman, and Hinman was forbidden to rebut that assertion in the presence of the jury.
The doctors contended that RFT had agreed not to publish any photos supplied by the doctors, and that the paper would allow them to approve the story about them before publication.
In the midst of the trial, U.S. Magistrate Judge Terry I. Adelman granted a motion submitted by defense attorney David Bub, ruling that Hinman's testimony would constitute "unfair surprise" and would deprive the doctors of a fair trial.
Hinman was permitted to take the stand and testify under oath outside the presence of the jury; she flatly denied the doctors' assertions that there had been any agreement placing conditions on her story.
Here, for your delectation, are a few choice bits from Witzel's motion:

The exclusion of Kristen Hinman's live testimony in response to Defendants' repeated use of her hearsay testimony made it impossible for Plaintiff to receive a fair trial.... Plaintiffs...were left with no ability to attack the credibility or veracity of Defendants' testimony. Defendants were able to create an unassailable alibi - Hinman did it, not us. The result was clear prejudice to Plaintiff, requiring a new trial....

During opening statement, Defendants' counsel avowed, and in the questioning of each and every individual Defendant, counsel sought to elicit testimony directed toward establishing an "agreement," an "understanding," and a "conversation" between Hinman and one or more Defendants about alleged restrictions on the use of the photographs and pre-publication review rights of the article. Indeed, this was the cornerstone of Defendants' presentation for mitigating the damages of their admitted "mistake" of turning over a disc containing nude patient photographs to a reporter whom they had just recently met. Defendants claimed they were the victims, that they had been "duped."

1. Did she ever tell Defendants they would have the right to pre-publication review?

2. Did the Defendants tell her that she could not use the photographs on the disc?

3. Who gave her the first disc containing Plaintiff's nude photographs?

The relevance and probative value of this testimony cannot be seriously disputed. The Court's exclusion of this testimony severely prejudiced Plaintiff from offering obviously relevant testimony that directly contradicted Defendants' self-serving statements and the alleged hearsay statements attributed to Ms. Hinman by the Defendants. In short, Defendants had an unfettered opportunity to set up an unassailable defense based upon one side of a story that clearly involved two opposing sides: Defendants and Ms. Hinman.

You get the idea. In Witzel's view, the case turned on the doctors' ability to freely impugn RFT and Kristen Hinman without ever having to expose jurors to Hinman's version of events.
But how, you ask, could such a slanted playing field have been constructed?
At the center of the judge's ruling not to allow Hinman's testimony is the swampy journalistic morass known as the reporter's privilege. Simply stated, the reporter's privilege is a reporter's right under the First Amendment not to be compelled to testify or divulge information in court -- the notion being that exposing the editorial process in U.S. courtrooms would jeopardize the bond of trust between reporter and source and discourage whistleblowers from coming forward.
Yes, it is ironic, isn't it?
At any rate, in his motion Witzel contends that "[t]he topics upon which Plaintiff sought to elicit testimony from Ms. Hinman were not covered by the privilege." To bolster his claim, the attorney cites a 1984 case in which "the Court held that questions posed to a reporter by her sources, about conversations she had with these sources, where the sources have already testified as to these conversations, are not privileged."
It remains to be seen how Witzel's argument will go over with the court.