December 01, 2009 at 2:01 PM
comment
Here's an update to a story Daily RFT first reported back in September.

Partnering with Dorsey in the project is his former boss, Jim McKelvey of St. Louis-based Mira Digital Publishing.

From what this Luddite can tell from the product's website, Square is a payment system that allows people to make and track credit-card payments and receipts on their mobile devices.

Joining Dorsey and McKelvey are several other partners. The company has an operations office in St. Louis (where?) and is looking to hire.

Here's how Square describes itself: 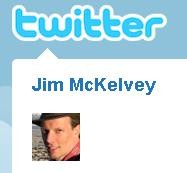 In February 2009, Jim McKelvey wasn't able to sell a piece of his glass art because he couldn't accept a credit card as payment. Even though a majority of payments has moved to plastic cards, accepting payments from cards is still difficult, requiring long applications, expensive hardware, and an overly complex experience. Square was born a few days later right next to the old San Francisco US Mint.

Today the Square team is focused on bringing immediacy, transparency, and approachability to the world of payments: an inherently social interaction each of us participates in daily. We're starting with a limited beta and rolling out to everyone in early 2010.

Square is backed by Khosla Ventures and a team of angels.