Get Thee to a Nunnery (or Left Bank Books): Sarah Dunant Talks About Sacred Hearts 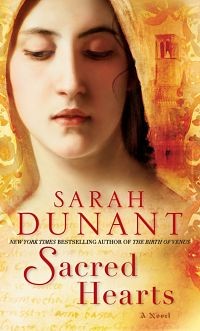 Sarah Dunant will be discussing her latest book, Sacred Hearts, tonight at 7 p.m. at Left Bank Books in the Central West End. Sacred Hearts is about the upheavals in a convent in Ferrara, Italy, in 1580 after the arrival of an unwilling young novice. Yes, the nuns sing. (Really well, actually.) But the most fascinating aspect of the book is Dunant's descriptions of convent life and the complex political balance of power among the nuns. (It turns out The Sound of Music is not the most accurate depiction of the lives of nuns. Who would've thought?)

Dunant usually lives in London and spends a lot of time in Florence, but she's been in St. Louis for the past three months helping to teach an interdisciplinary comparative literature course at Washington University. Daily RFT sat down with Dunant Friday afternoon to discuss history and nuns and the lives of women during the Italian Renaissance.

Daily RFT: Tell us a little bit about your course at Wash. U.

Dunant: I've been team-teaching a course on Renaissance Studies. Harriet Stone, the director of comparitive lit, put it together. We talk about the place of music during the Renaissance and the art. I talk about the source material. They've been reading two of my novels, The Birth of Venus and In the Company of the Courtesan. We discuss where politics begin and family ends and whether love and desire were the same five centuries ago and how to ask questions about the past. It's a new way to teach history.

What drew you to the Renaissance?

Nine years ago, I spent a summer in Florence. You can't go to Florence without having your mind blown. What on earth happened there 500 years ago? I wanted to write a novel to convey "the shock of th enew", as if it were happening now. If I could somehow bring it to life... And the more and more history I read, the less and less I saw of women. I asked myself the simple question, did women have a Renaissance?

Where do you find source material?

The past two generations of scholars have been in archives, looking at church and parish records and the police who walked the streets at night, the stories of ordinary people. It's very rich. You see the names in court records, like fish, jumping in and out. My characters are made up, but they have echoes in the past.

I understand you spent time in a convent yourself doing research.

I stayed in a Benedictine convent [like the one in Sacred Hearts] south of Milan for a week. They still have eight services a day. The two a.m. is the killer. It explained quite a lot. It has a semi-hallucinatory quality.

Does that explain some of the possible miracles in the book?

It's not my job to walk in as a 21st century woman and say they didn't see God. I, as a writer, must believe in God and that they are seeing something real -- something that they think is real. I'm not here to bring atheism back into the past.

Was it difficult to imagine the lives of these nuns? A lot of them seem to have been stuck there by their families.

It took a lot of time to give up my 21st-century anger on their behalf. I stopped writing after the first two chapters. But then I thought, I'm doing them such a disservice. The future doesn't exist yet. These women didn't start a revolution. They have to live with what they've got. And compared to what went on outside, they had a lot. How many women back then died in childbirth? The nuns had their creativity. They sang and wrote and performed plays. Back then, it was shocking to have a woman perform in public. Zuana [one of the main characters] was a doctor. What looks like prison was a source of creativity. It's arrogant for us to think, "poor them." For me, it's more interesting to see the way history was lived in the cracks.