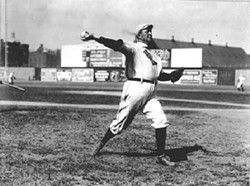 Sigh.
What? Oh, no. Nothing. No, I'm fine. It's just... no, never mind.
Well, I mean, it's just that, well, see, there's this award, called the Cy Young, and each year it's given to the best pitcher in his respective league. What? Oh, no, they just have a bunch of people who vote on it. Yeah, it does sound like a pretty cool award, huh?
Why am I so sad, then? Well, I mean, I know I shouldn't be, but see, there's this pitcher. Actually, there's these two pitchers, and I really like them both, you know? But even though both of them probably could have won the Cy Young, yesterday the voters gave it to this little stoner skate punk kid from San Francisco. I know, right? So yeah, I mean, I'm just a little bummed, you  know?
The Cardinals had two horses in the Cy Young race, and neither of them ended up in first. Tim Lincecum collected his second Cy Young award in a row, edging out both Chris Carpenter and Adam Wainwright by a thin margin.
Unfortunately, I can't fault anyone for Chris Carpenter failing to win his second Cy Young award except his own oblique muscle. And I can't blame anyone except Tim Lincecum for Adam Wainwright failing to collect the first of his record nine Cy Youngs this year.
The voters, as much as it pains me to say it, probably got it right. Probably. I did say probably, right?
Of course, that doesn't mean I have to like it. And damn it, I don't.
In reality, all three pitchers were deserving candidates who had outstanding seasons, and I could have seen any of the three winning the award and not being upset. Still, Tim Lincecum was just ever so slightly better than either Carpenter or Wainwright this year, and the voters made the right call. Did I mention how painful it is for me to have to say all this? Nonetheless, the analyst in me requires I say it. The best pitcher in the National League this year was Tim Lincecum, and he was rightly recognised with the Cy Young award.
I'll admit, the fan in me is heartbroken Chris Carpenter didn't win the award. Don't get me wrong; Wainwright was fantastic as well, and certainly deserved all the consideration he received, but when I think about a pitcher being dominant, Carpenter is the one who springs into my brain, ready to reduce any and all opponents to ash with the sheer hatred of his pitching. If Carpenter hadn't missed five weeks with his oblique injury, I have a feeling he would have walked away with this thing. Still, he did miss that time, and 30 innings (the innings advantage Lincecum held), is a serious difference.
The really odd thing here is that ordinarily, I would be jumping for joy over a victory like this, convinced it proved that the people who vote on awards like this one were moving toward the modern statistical age. Wainwright had a big advantage in wins, and voters have historically loved wins. Of course, wins for a pitcher are damn near meaningless, as they reflect how good a team you happen to pitch for as much as they do how good a pitcher you actually are. Thus, the fact voters apparently ignored the win difference should make me feel good.
Likewise, while Carpenter had the advantage in ERA, he also pitched a significantly lower number of innings this year, and the value of those extra 30 innings is tough to overstate. Just think of how much better off the Cardinals would have been this season if Chris Carpenter had made just five of the starts which went to Brad Thompson or P.J. Walter or, god bless us and keep us, Todd Wellemeyer. Again, I should be glad the voters saw the extra value Lincecum provided his team by remaining on the field all season.
So yeah, this should be a good thing. And I suppose it probably is. Tim Lincecum is one hell of a pitcher, and he put together a remarkable season. So says the analyst in me.
And as for the fan in me? Well, he says up yours, Timmy. You stole my boys' award.