The Best Headline Ever, And a Possible Solution to a Very Tough Problem

So yesterday Joe Strauss of the Post-Dispatch writes an article about Mark McGwire, the day when he will finally have to Talk About the Past, and the way the Cardinals plan on trying to handle the potential reaction of the fanbase.
And then, someone did something really great to that article. I'm assuming it was an editor, going off how things work around here, but I could be wrong. Regardless of who it was, they gave it the best title I think that article could ever have had.
"Cardinals Wrestling with McGwire's Coming Out." Seriously. Is that not the best title you've ever read. Someone had to have realised the social overtones of such a statement.
Then again, it also got me thinking, and I think we may have stumbled on a way for McGwire to avoid talking too much about his steroid usage.
Mark McGwire needs to come out of the closet.
Now, just bear with me for a second on this one, okay? I know what you're thinking; you're thinking crazy old Aaron has gone off his meds again and is going to say something either really stupid or really weird or both.
But just think about it. If Mark McGwire were to come out and publicly announce he were gay, literally no one would ever ask him about steroids, like, ever. It would be brilliant. It puts a stop to virtually all the pertinent questions.
Q: Why would McGwire, despite hitting 49 homers as a rookie, feel it was necessary to take steroids?
A: Well, duh. I mean, have you seen some of the guys at the gym? He wasn't doing the 'roids, he was just trying to get his yoga instructor's attention. Plus, you know how it was in the Bay Area in the 80s.
Q: 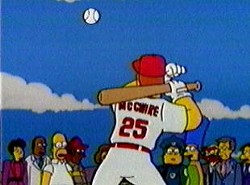 See how smart this is? Plus, think of all the hilarious innuendos we could come up with regarding the Big Mac moniker. Hell, I can think of eighteen ways the phrase "Big Mac Attack" could be used just in batting practice, each more brilliant than the last! You want proof? Oh, no, I'm not falling for that. You just want to hear my best material so you can steal it when the Cards' PR department realises how awesome this idea really is and puts it into motion. I would like to point out a very similar strategy has worked brilliantly for Sammy Sosa recently.
In fact, I think this is how all public relations issues should be handles from now on. No, I wouldn't just have everyone pretend to be gay. That's just stupid. No, we would need to finesse it a bit.
You say Jude Law had an affair? So what! I just can't get over the fact he has an island where he brings elderly people and hunts them for sport, armed only with a garden rake.
What? Nicole Richie was rushed to the ER again? Well, that's probably because the paper said she has to feed on the brains of endangered white tigers every hour or she'll die.
Yeah, I saw that story about Britney Spears being all crazy and fat, again. But dude, that's nothing. Turns out she's actually a zombified panda bear the Chinese sent here in 1980 to overthrow our government!
See, suddenly no one cares about the shit you actually did.
So how about it, Mac? I promise, all you have to do is go a little bit Nellie for a couple months, and all this steroid stuff will go away. You'll never have to answer an uncomfortable question again. Well, except all those other uncomfortable questions this plan would raise. But let's not focus on that right now. Kay?
And to Johnny Mo: says in the Strauss story you're worried about the way to reintroduce McGwire to the public. Well, worry no more. I've got you covered.

The Rundown Baseball Shit That Gets Passed Around