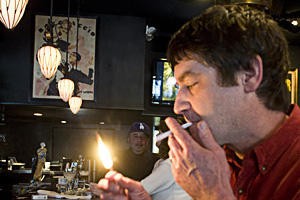 St. Louis' most tireless smoking-ban opponent Bill Hannegan stopped by the Riverfront Times the other day. In so doing, Hannegan hinted how his Keep St. Louis Free plans to topple the ban in the city that is slated to go into effect January 2011.

The strategy, says Hannegan, would be to challenge the ban's exemption that allows for smoking to continue unabated in St. Louis casinos.

A quick refresher for those of you not caught up on the issue: On November 3, voters in St. Louis County overwhelmingly voted in a smoking ban that also triggered a somewhat similar ban for the city of St. Louis.

Both the city and county laws exempt casinos from the smoking bans. In the county, so-called "drinking bars" whose alcohol sales outweigh food sales by a margin of 3 to 1 will be exempted from the ban indefinitely. In the city, bars of a certain size (less than 2,000 square feet) are also exempted from the ban but only for a period of five years. After that, all bars will be smoke free.

The sunset provision of the city's ban particularly irks Hannegan. "This is going to hurt bar owners in the city a lot more than in the county," he says.

So, if Hannegan is so concerned about how the ban will impact bar owners, why is he now targeting the casinos?

Because he views the casino exemption as an unfair legal loophole that could kill the smoking ban all together. And there's legal precedent elsewhere to believe such a challenge would work.

In 2007, a court in Kentucky struck down a smoking ban in Louisville that banned smoking in all public businesses except famed horse track Churchill Downs. In that case, a judge ruled it unconstitutional that the smoking ban affected every business but one special interest.

The Missouri Constitution has a similar statute prohibiting "special laws" that only favor one specific entity. Hannegan believes the exemption for casinos falls under that category. So, too, does Kansas City attorney Jonathan Sternberg.

Sternberg is the lawyer who represented a consortium of businesses that challenged Kansas City's smoking ban last year. That lawsuit argued that Missouri's 1992 Indoor Clean Air Act explicitly excluded bars and restaurants from smoking regulations and that municipal laws could not trump state law.

Sternberg's case lost an appeal earlier this year and the Missouri Supreme Court declined to hear the case. Yet, Sternberg believes the same argument could win the support of appeal judges in eastern Missouri and eventually bring the issue before the state's highest court.

He is even more convinced that judges would disagree with the casino exemption.

"I'd like to hear a convincing argument as to why casinos have such a special relationship to smoking -- unlike any other business -- that they should be allowed to be exempted given the purpose of the law," says Sternberg. "And what is the purpose of the law? It's to protect people's health right? Well how are casinos different?"

Sternberg adds that since the number of casinos in Missouri is limited to 13, they could be viewed as a closed-class receiving special treatment under the St. Louis smoking ban.

As you might have guessed, Hannegan and Sternberg have been in discussion about a St. Louis challenge to the smoking ban.

But before any legal paperwork is filed, Hannegan says he needs some financial support from bar owners.

"I've already contributed about $30,000 to fighting these bans," says Hannegan, a painter by trade who considers himself only a social smoker. "It's time for the people who would be most impacted to take ownership."

Hannegan speculates that it would cost between $30,000 and $40,000 to fund a lawsuit against the St. Louis ban, which he sees as easier to overturn than the county law that permanently exempts both casinos and bars.

"That's a relatively small sum of money, especially considering how much St. Louis bars stand to lose economically," he says.

Click here to read another take on a legal challenge to the St. Louis smoking ban.