7 Coaches Who Should Replace Charlie Weis at Notre Dame 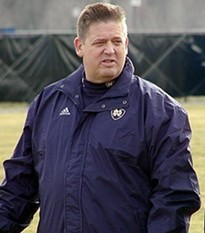 As we near the end of another college football season, one of America's favorite subjects rises again: What happens to Notre Dame?

Why is this non-story a story? Yu don't have to look far -- whether in St. Louis or in any other part of the country -- Notre Dame fans, however obnoxious or uppity, are everywhere.

Since Lou Holtz left the Irish after the '96 season, the national relevance of the program has diminished almost as much as Holtz's relevance as an ESPN analyst. Notre Dame has no trouble being relevant to fans or the media because it's, well, Notre Dame. But the program isn't the problem, it's the coach. When Charlie Weis was brought in five years ago, it was because he was an alumni and he had credentials as the offensive coordinator for the Super Bowl-winning dynasty New England Patriots. It seemed like a logical choice, right?

Weis' credibility as a coach isn't in question; it's whether he's right for Notre Dame. In five seasons, he has amassed the same record and winning percentage as the two guys before him: 35 wins, 25 losses, just like Bob Davies; and a winning percentage of .583 just like Davies and Tyrone Willingham.

Not to mention Weis broke the unwritten Notre Dame rule: "Do not lose to Navy." He lost to them twice -- at home. No other coach in college football has been under more scrutiny and measure than Weis. Even Steve Spurrier, a legend who was hired at the same time at South Carolina, isn't in the hot seat. It's the program and Notre Dame at some point needs to hire a guy who can win. Say what you want about recruiting, how they're not in a conference, their weak schedule, the weight of tradition and tough academic standards. Weis is no different than the two coaches before him, and they ultimately failed at ND.

It is unclear with two games left whether Weis will be let go; he doesn't seem to care either way, and it's obvious that a decision has probably been made. It's out of Weis' control and that is OK, as he stands to walk away with some pretty good dough.

Who can win at Notre Dame, who should replace Charlie Weis?

Urban Meyer
After two national championships in three years and a possible third in four years, he seems like the logical choice. A national recruiting ground at his disposal (not just Florida and the rest of south to pick from); proven success wherever he has been (Utah went to BCS in his tenure) and a proven leader to young men, "Pope Urban" coaching Notre Dame has some poetry to it. Meyer even has roots with Notre Dame, as a wide receivers coach from1996-2000. So with Jimmy Clausen, Golden Tate and Mike Floyd on that offense, along with Kyle Rudolph, there is no reason why Meyer couldn't make them all Number 1 in the country.

Brian Kelly
Currently he is the head coach of one of the hottest, under-the-radar teams in the country, The University of Cincinnati. Kelly has a background that goes into Division II football with back-to-back D-2 national championships at Grand Valley State. Kelly is more of a defensive-minded coach, so with his hiring fans know he can turn it around for the Irish, who seem to have lacked the 'fighting'" that with defense this year and throughout the Weis era.

Gary Patterson
At 49, he is young enough to make a name as one of the greatest coaches in Notre Dame History. Currently he is the head coach of TCU, which is running a 10-0 record playing against competition much like Notre Dame. Patterson has been all around the college football circuit and like Kelly (above) is a defensive minded guy. In eight years at TCU, Patterson's 73 victories place him in second place on the TCU career victory chart and he is the only coach in school history to record six ten-win seasons. Over the course of the 2005 & 2006 seasons, the Frogs won four consecutive games against Big 12 opponents, with only one of the four coming at home.

Bud Foster
As a defensive coordinator at Virginia Tech, Foster has been successful at breading tough defenses that rank in the top of the country; in fact he has only had a defense rank outside the top 20 three times in the past decade. Foster, 50, and like the gentlemen listed above him has a great coaching pedigree and the major benefit of Frank Beamer as his mentor since 1987. He would certainly be a worthy candidate to succeed Weis -- and he would bring a lot of swagger to a Fighting Irish. Question is, can he win a championship and recruit like the candidates above? He has zero head coaching experience and that didn't work out for the last few guys.

Jim Harbaugh
Currently he is 6-3 this season at Stanford, which like Notre Dame, has tough academic standards. In just two years he has been able to make his team competitive in an up-and-comer in the Pac-10. Oh yeah, he crushed USC 55-21, something every Notre Dame fan would relish in, with eight straight losses to the Trojans. A former NFL quarterback, he would benefit Jimmy Clausen. Harbaugh's coaching lineage also comes into play, as his father was a football coach for eighteen years, including fourteen years as head coach at Western Kentucky. His turnaround of Stanford's program is remarkable and his turnaround at ND could be amazing. Despite that he is a "Michigan guy" and may end up coaching there, he would be a good fit at Notre Dame.

Bob Stoops
A proven winner in the college ranks, Stoops has had his Sooners consistently ranked within the national Top 10 at Oklahoma since 1999. He's helped them to two National Championship appearances and one win. Stoops is another defensive-minded tactician, but he can recruit and that will go a long way for Notre Dame, as they have struggled to pull from the Texas/Oklahoma pool of football talent. Stoops knows how to work the recruiting game. Stoops would be a very smart hire for the Fighting Irish with a record of 114-28 (0.803) he can keep national championship relevant for many years to come.

Jon Gruden
Gruden's probability as coach is bit of a stretch at this point -- because he just signed a new contract with Monday Night Football on ESPN -- and it seems he may be more interested in have video games named after him in the future, rather than coach again. His unlikely combination of youthfulness and experience as a Super Bowl-winning head coach make him a viable candidate to coach in South Bend.