The Dead Guy in Smith Case Speaks. Sort Of.

November 18, 2009 at 2:00 PM
comment
At yesterday's federal sentencing of Jeff Smith, U.S. District Judge Carol Jackson noted her receipt of numerous letters asking for leniency for the former state senator. Jackson said she never counted the missives, but estimated that they well could have totaled 100.

Luthmann was a friend of Artie Harris, a 2004 campaign worker for Smith who, according to court documents and testimony, lied to the Federal Elections Commission on Smith's behalf in early 2007, and then committed suicide two months later. 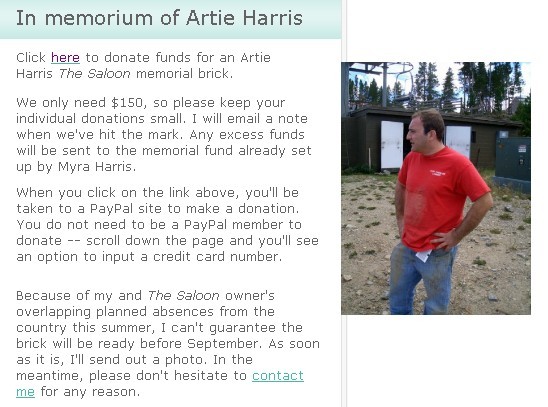 According to wiretaps, Smith tried to blame his campaign's misdeed on Harris.

His friend, Luthmann, was none too pleased when those revelations surfaced this past summer. "I write this to the St. Louis paper and to the people of St. Louis to make it known what a despicable piece of slime Jeff Smith is," Luthmann subsequently wrote in a letter to the St. Louis American.

I am a good friend of the late Arthur "Artie" Harris, the Communications / Press Director of Jeff Smith's 2004 U.S. Congressional Campaign. I went to college with him at Columbia, played rugby with him, and counted him as one of my very best friends. I was dejected when he died - well before his time.

I write this to the St. Louis paper and to the people of St. Louis to make it known what a despicable piece of slime Jeff Smith is.

Jeff Smith is not slime because he cheated in his political campaign. Smith, along with Artie, Nick Adams and Steve Brown, were always very intelligent and ambitious people, and sometimes the drive to win at all costs blinds you to the line between what is permissible and what is out of bounds. Jeff Smith is not slime because he lied. He is disappointing, but many have lied. We have almost come to expect this from politicians. It is sad. Having watched his documentary (which Artie produced) and met him personally, I thought Jeff was different.

Jeff Smith is slime because of the information that came out in the criminal complaint released by the U.S. Attorney earlier this week. When the heat was turned up, and Jeff Smith was faced with a decision, his true character revealed itself. He tried to pin his lapses in judgment and violations of law on a dead man. He went so far as to say that his former staffer would want Jeff Smith to posthumously "throw him under the bus" so that Smith could save his hide.

I am not saying that my friend was without blame in this matter. However, when I saw Jeff Smith at my friend's funeral, I thought that it was an amazing gesture for him to fly in and be there. We even watched "Can Mr. Smith Get To Washington Anymore?" as we mourned, remembering Artie. Now, in light of these recently revealed facts, I wonder how much was altruism, how much was self-preservation and how much was outright guilt. My friend spoke to the Federal Election Commission on March 1, 2007. On May 4, 2007, he was dead.

In a recent e-mail to his supporters, Jeff Smith said:

"I deeply regret the mistakes that have forced my resignation, but I hope you will balance them against the totality of my service, and that we can work together again in the future."

There is nothing that can balance against Jeff Smith's despicable acts, and yet, in his delusional mind, he thinks that there still may be some room for his return to public service in the future. There is no room for Jeff Smith to hold any position of public trust now or any time in the future. I would not even trust him to clean toilets in a public building - to see him earn another red cent of taxpayer money would be an abomination of the highest degree.