What? TMZ Got it Wrong!? St. Louis Dumpster-Diver Is Enjoying Hollywood Vacation

November 17, 2009 at 2:58 PM
comment
Had a conversation today with Albert Watkins, the attorney for Casey Ray.

Ray, if you'll recall, is the woman who in May found a copy of the script for the Twilight sequel New Moon in a Dumpster outside the Chase Park Plaza hotel in St. Louis.

Watkins says a TMZ.com news item about Ray -- mentioned on this here blog yesterday -- is not true. 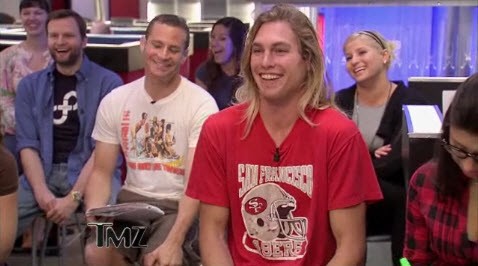 Earlier this week TMZ reported that Ray was ungrateful with the arrangement Summit Entertainment made with her after she -- on the advice of her attorney Watkins -- returned the script to the film company. Summit, in turn, rewarded Ray with tickets to last night's Hollywood premiere of the film.

According to TMZ, Ray is now complaining about the deal because she had to pay her airfare and hotel accommodations in L.A.

That's wrong, counters Watkins, who says that he, too, was contacted by TMZ.

"Casey and I told them that we would have loved it if Summit had paid for her flight and hotel, but that was never part of the deal," Watkins tells Daily RFT. "They just took that one part of our conversation and ran with it."

Watkins adds that part of the deal with Summit has Ray receiving a copy of the script signed by the actors in the film, which could net thousands of dollars at auction.

But what was Ray -- a hairdresser with Salon K in the Delmar Loop -- doing in the hotel's garbage to begin with?

"She was waiting for her boyfriend and just killing time," explains Watkins. "She's a Dumpster diver. Look, I'm not going to judge her hobby. She opened the bin and the script was lying there right on top. It's not like she was inside the Dumpster rummaging through the garbage -- though I'm not saying she wouldn't do such a thing."

Oh, btw, last night Ray had a great time at the premiere. Take a look for yourself in the photos after the jump.