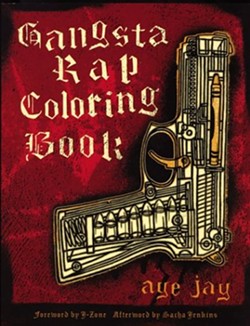 Not that rap lyrics are required to rhyme, but we here at Daily RFT are having the darndest time imagining the following sentence as musical verse:

That sentence is a crucial piece of evidence in the trial of Olutosin Oduwole, a student at Southern Illinois University - Edwardsville who prosecutors say was plotting a terrorist attack.

The sentence in question (which referenced a PayPal account) was found on a piece of paper inside Oduwole's abandoned car back in 2007. The note coincided with a police investigation into Oduwole's attempt to buy guns through the Internet. Prosecutors say the note in the car was a terrorist threat.

But as Oduwole's attorney argued in court yesterday, the defendant is an aspiring rap artist who was just taking a few cues from famous musicians Bob Marley and Johnny Cash.


Assistant State's Attorney Jim Buckley argued that Oduwole had purchased four guns online and was awaiting their delivery, but police were able to "connect the dots."

"These are not lyrics," Buckley argued. "These are very scary threats."

The defense attorneys had argued in a written motion that song lyrics often contain references to homicide. They cited a song in which Bob Marley sang about shooting the sheriff but not the deputy, and another in which Johnny Cash sang about shooting a man in Reno, just to watch him die.

But Buckley argued in a written response: "Bob Marley does not sing, 'I shot the sheriff, and in seven days I'm going to shoot the deputy.'"

The newspaper goes on to report that Oduwole -- who raps under the name Tosin -- has released several rap videos on YouTube in recent months. One of those rap song, which has now been removed from YouTube, was called "Not Guilty."

The lyrics of that song apparently state: "First they put my name up on the news, lied about me on TV, tried to say I was just like that Asian that shot up VT."

The song continues: "Let these haters crush my dreams, and let them (expletive) on my name. That'll be the day I cop a chrome D Eagle, hollow tip in the chamber, put a bullet to their brain."

A "chrome D Eagle" is an apparent reference to a Desert Eagle handgun.

Circuit Judge Richard Tognarelli said he'd soon rule on whether or not the note in questions was lyrics or a terrorist threat.